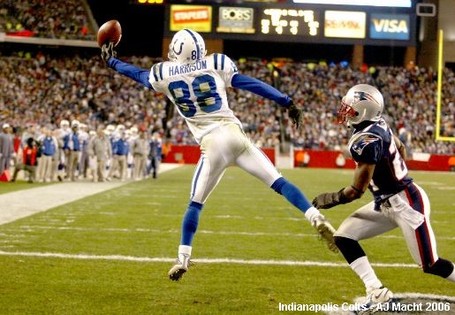 Here's the story... Marvin Harrison carries a cap hit this year of over $13 million, which is more than the Colts think they can afford. They've asked to him to restructure his contract, which he was not willing to do and has now reportedly asked for his release.

So now the predictions as to where he'll end up begin. NFL Network's Adam Schefter predicts it's right here.

Already the speculation about where Harrison will land is beginning. For starters, Harrison is determined to continue playing. A logical landing spot would be the receiver-needy Philadelphia Eagles, where Harrison would be reunited with his former Syracuse teammate, QB Donovan McNabb, while getting to play in the city where he lives.

So we get the idea here. He was born in Philly, he went to college with McNabb... So if a media guy is going to speculate I can see where Philly would be a logical guess.

Marvin Harrison is flat out one the best players to ever play the WR position. His place in Canton is already secured. The problem is whether his eventual trip to Canton will come sooner or later. Harrison will be 37 years old at the start of next year and has shown a noticeable decline in production the past two years. He was injured 2 years ago and last year his numbers were well below his career average.

I'm just not sure that at this point in his career Harrison would be what we're looking for. It seems like Harrison is looking to start and make a lot of money neither of which the Eagles are likely to offer him.