Thursday a deadline for Dawkins & Thomas?

Share All sharing options for: Thursday a deadline for Dawkins & Thomas? 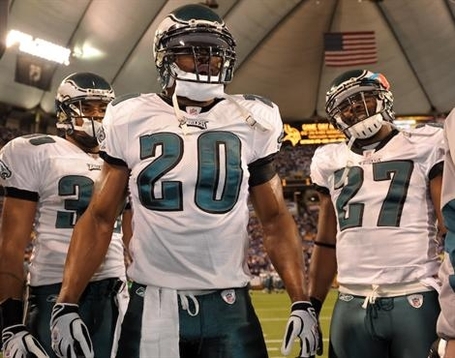 At the scouting combine this weekend, Eagles president Joe Banner addressed some local media about the teams plans for their own free agents heading into the start of free agency this Friday.

We should know by Thursday night whether Brian Dawkins and Tra Thomas, the two longest-tenured Eagles, will remain with the team in 2009, Eagles president Joe Banner said over the weekend.Banner, speaking to a Daily News reporter in the lobby of the Birds' team hotel at the NFL Scouting Combine, said this year, as is usually their policy, the Eagles will make their intentions clear to their pending free agents before the swap meet gets under way, at a minute after midnight Thursday.

Banner said that the Eagles would make offers to the players they wanted to keep and if those guys didn't sign by the start of free agency, it was a clear signal to Joe.

If a deal isn't done by the start of free agency, Banner said, the player "knows he wants to leave, or there's a better deal somewhere."

Banner had a few other little tidbits in the interview about the free agent market in general.

"There's not any position [in free agency] where the shortage of players vs. the demand is more out of whack [than at offensive tackle]," Banner acknowledged.

"I wish there were more free agents available," Banner said.

When last year's LTBE incentives are rolled into next year's cap, the Eagles are expected to have nearly $40 million in cap room. The NFL free agency period starts Firday at the stroke of midnight.