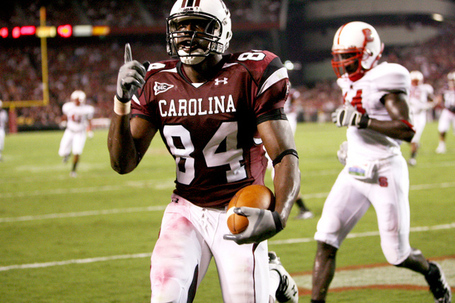 "Not really," general manager Tom Heckert said. "If there had been a guy we really, really wanted and needed, we probably would have stayed there. Obviously, it would have been better for us if Carolina had had a poorer record. But there's no second thoughts.

"If we were in the same position [again] and there was a guy there we felt we didn't really have to have, we'd do it again. We thought Jeff Otah was a good player. But he fits their [run-oriented] offense a lot better than he fits ours

Even though the Eagles aren't likely to spend either of their two first-round picks, at No. 21 and No. 28, on a receiver, there are some interesting names that could be on the board for their turn at No. 53 in the second round. After all, 48 players were chosen before the Eagles took Jackson.

One of this year's receivers is Kenny Britt from Rutgers. At 6-4, 215 pounds, he has the size and leaping ability to be a red-zone threat, which is something the Eagles need. Three others with decent size are Maryland's Darrius Heyward-Bey (6-2, 206); North Carolina's Hakeem Nicks (6-1, 210), and Ohio State's Brian Robiskie (6-3, 209). A more versatile option might be Penn State's Derrick Williams.

Just by watching with eyeball test, it was obvious Abilene Christian’s Johnny Knox could really move. Texas-Austin’s Quan Cosby, Florida’s Percy Harvin and Maryland’s Darrius Heyward-Bay also appeared to run well. Unofficially, they were blazing. We’re waiting on the official times to come in after the second group runs, and we will pass those along as soon as we can.

Miami has had at least one player drafted in the first round for the past 14 years dating back to 1995. The streak started with defensive tackle Warren Sapp, who went to the Buccaneers, and continued all the way to last season with safety Kenny Phillips, who went to the Giants.

But this year, the only Miami player at this year’s scouting combine is Hurricanes cornerback Bruce Johnson, whom NFL Network draft analyst Mike Mayock does not project as a first-day pick.

According to an announcement inside Lucas Oil Stadium for the benefit of scouts in attendance, Smith’s whereabouts were unknown for a time Saturday morning. About 30 minutes before he was scheduled to work out, he finally was located, but there were conflicting stories about why he was absent.

Smith, projected to be drafted as high as No. 2 overall by the Rams, came into the combine with some question marks. He was suspended from Alabama’s appearance in the Sugar Bowl for alleged improper contact with an agent, and he reportedly has struggled to keep his weight in check.