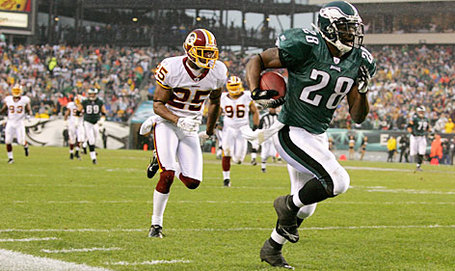 Comcast sports has a story about how much interest RB Correll Buckhalter is getting around the league. A "source" tells them at least a dozen teams are interested in Buck!

A league source has informed Comcast SportsNet’s Derrick Gunn that at least 12 teams have shown interest in Buckhalter, who becomes an unrestricted free agent on Feb. 27.

The Giants, Rams, Titans, Broncos, Texans, Lions, Buccaneers and Jaguars have expressed the most interest. Selected in the fourth round of the 2001 draft, the 30-year-old Buckhalter has spent his entire career with the Eagles – but has started only 16 games.

Anyone willing to take bets as to who that "league source" is?