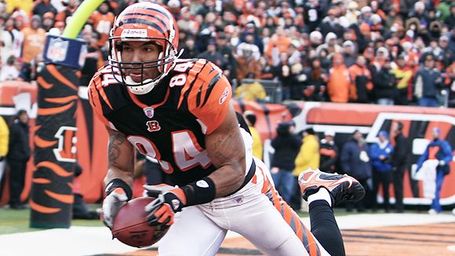 Houshmandzadeh said he would consider the Bengals if they offer him "a fair deal" once free agency opens. But he has said in the past that going by history that hasn't happened yet.

"I didn't go to the last two (seasons of) voluntary workouts because I felt like I was underpaid compared to what my peers were getting," said Houshmandzadeh, who signed a four-year deal for roughly $3 million per before the 2005 season.

As early as the first 15 minutes of the offseason Houshmandzadeh said he would defy the tag and not report to the Bengals again for the offseason workouts. When he went on national radio last week to shop his wares, it became clear the Bengals were in a longshot to sign him before free agency, although it appears they plan to jump into the fray when other teams seek his services.

This past weekend Bengals' QB Carson Palmer bet Houshmandzadeh(old hat now) that he would be hit with the franchise tag. Undoubtedly Palmer will be none too happy that he'll likely be losing a player who led the NFL in receptions 2 years ago and last year led the NFL in third down catches.

We know Houshmandzadeh(could spell it in my sleep now) has interest in the Eagles... it's time to officially let the speculation as to whether the interest is mutual begin.