Share All sharing options for: Troy Vincent a finalist to head NFLPA 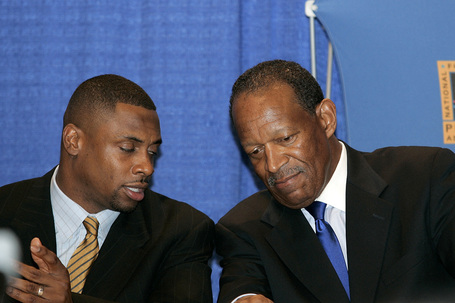 The race to succeed Gene Upshaw as head of the NFL players association has been narrowed down to three names. Former Eagle Troy Vincent, Trace Armstrong, and a lawyer named DeMaurice Smith. The race is expected to mostly be between Armstrong and Vincent.

The pick of a new NFLPA head will be important given the situation facing the NFL and it's collective bargaining agreement with the players. Last year, NFL owners voted to opt out of the previous CBA and now face the prospect of uncapped year in 2010. Before you think that means a spending spree by rich owners, a host of negative consquences for players and teams will also take effect.

• The top eight playoff finishers from the previous season would be allowed to sign free agents only at the rate at which they lose them.

• Players would need six NFL seasons to be eligible for free agency, rather than four.

• Each team would be allowed to restrict two eligible free agents with "franchise" or "transition" player tags, rather than one.

It certainly appears to be a scenario both sides want to avoid.