Share All sharing options for: Football 101 - Defense: Technique and Gaps 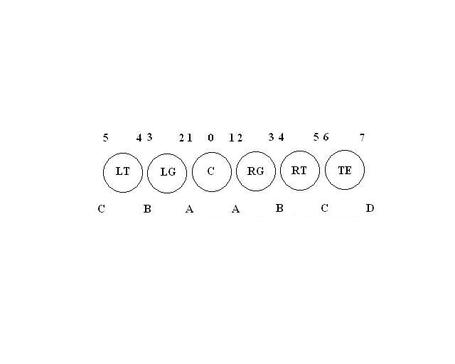 I’m going to get things rolling on our Football 101 series here with the defensive side of the ball.  As we’ve become accustomed to hearing, Andy believes that you need to build a team from the inside out, and I’m going to take that same approach with this series.  The first topic that I’m going to take a look at is techniques and gaps along the defensive line.  Before the play can even begin, everyone needs to be lined up correctly and know what they’re doing at the snap.

As a quick note, and this will most likely apply to every post in the Football 101 Series, what I’m saying isn’t exactly gospel.  The basics will apply universally, but moving from system to system and even from scheme to scheme within the same system, things may not always apply.  Most of this information will be the bare bones basics that each team has made their own.  However, I’ll try to point out specific discrepancies along the way where possible.

What technique boils down to is the physical location where you line up before the snap in relation to an opposing player.  Below is a basic representation of technique in relation to the offensive line.  I’m using basic inside/outside shoulder technique, but you can also add an additional number to signify lining up directly across from the lineman. 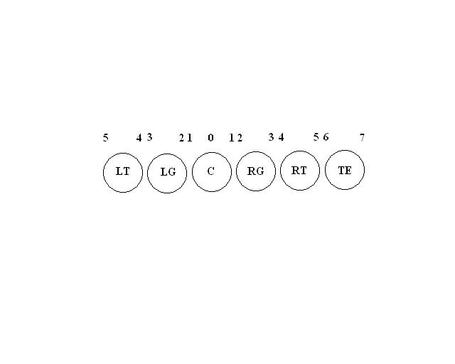 So let’s take a quick look-see here.  The most basic technique is a 0 technique, where the defensive lineman lines up directly across from the center.  In the 1 technique, the player is lined up over the center’s outside shoulder and in the 2 technique, over the guard’s inside shoulder and so on and so forth.  There are two areas of interest here; first many times in a 4 technique, the player is actually lined up across from the tackle.  Additionally, all systems will differ once they hit 7 technique and higher.  These numbers can be used, not only to signify shoulder alignment, but also depth alignment.  For instance, in a Joker package, the Joker may be in a 9 technique lined up over the tackle’s outside shoulder and 2 yards off the line of scrimmage.  In 8 technique, the same Joker may set up on the line of scrimmage.

Just as technique refers to pre-snap positioning, gaps basically refer to the player’s assignment or responsibility post-snap.  Below is a basic representation of gaps in relation to the offensive line.  Again, I’m using a basic gap representation, but in reality, any of these alphabetical gaps might be followed by a number that will influence what the defensive player does a bit. 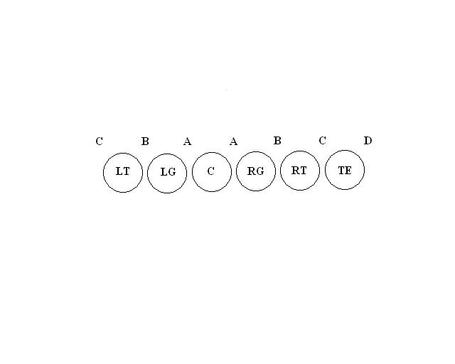 So after a quick glance, it’s easy to see that it’s a fairly simple system.  The A gaps are between the center and the guards, the B gaps between the guards and the tackles, the C gap(s) between the tackle(s) and the tight end(s), and finally the D gap(s) outside of the tight end(s).  Gap designations are simply used to signify areas in the offensive line that will be attacked by a defensive player.  The most critical thing to note when talking about gaps is the difference between one gap and two gap assignments.  If a defensive player is slated for a one gap assignment, their role is to basically take out whatever is in that gap; be it a lineman, fullback, or running back.  A two gap assignment is basically an option play on the part of the defender.  He is expected to quickly evaluate the situation and pick the gap that will most easily be exploited.  This is a common task for a nose tackle that is lined up directly over the center.

So, next time you hear a player evaluation that states that So-and-So is an excellent 3 technique defensive tackle that attacks the B gap extremely well, you’ll know that basically that means that he’s a player that usually lines up on the outside shoulder of the offensive guard and attacks the hole between the guard and the tackle very well.