Guess what Freddie Mitchell is up to these days?

Share All sharing options for: Guess what Freddie Mitchell is up to these days? 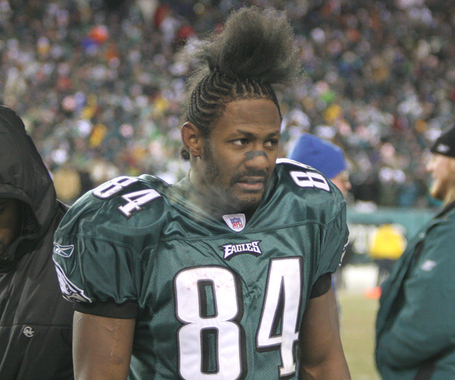 These days Freddie Mitchell owns a BBQ restaurant in his hometown of Lakeland, Florida. Last week, someone ironically sent the man known as "Fredex" a package from FedEx full of what the police called "dope."

Football hero-turned-restaurateur Freddie Mitchell is under investigation after what law enforcement sources say was a package of marijuana was delivered Thursday to his Lakeland business.

Mitchell says the cops are looking at the wrong guy.

"This is a case of mistaken identity," Mitchell told The Ledger Monday.

Mitchell, 30, was briefly handcuffed Thursday but not arrested.

His lawyer, John Liguori, said Lakeland police botched the investigation when they prematurely took Mitchell into custody at his restaurant, Brothers Bar-B-Q, before confirming he was the intended recipient of the FedEx package.

Mitchell's lawyer called it a case of "celebrity hunting." I'm sure Freddie was flattered to hear that someone still considers him a celebrity...

I'm sure he also appreciated that the story referred to him as "Ex-NFL standout Freddie Mitchell."

The best part of the story however, is the end.

In Philadelphia, despite some good years, he lost his job for what he described on MySpace.com as "running my mouth."

Which good years were those?