Five questions with the Giants

Share All sharing options for: Five questions with the Giants 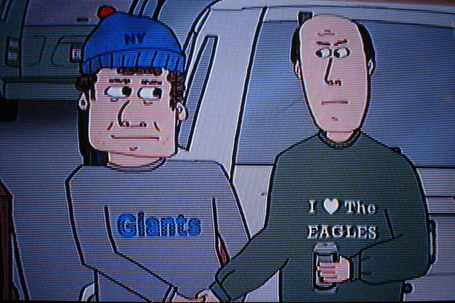 This week I traded questions with Ed over at the Giants blog, Big Blue View. Ed also happens to be a contributor to our Yankees site, Pinstripe Alley... So, suffice to say Ed is truly the epitome of all that's evil and wrong.

So check out his responses after the jump and keep an eye out on Big Blue View for my answers to his queries.

BGN - 3 weeks ago the Giants were riding high as everyone's prohibitive favorite to not only win the NFC east, but probably the whole NFC... Fast forward to today and you're on a 2 game losing streak and everyone is wondering if they're early season success was due to a weak schedule. What is behind the Giants' recent struggles?

BBV - Well, the Saints and the Cardinals are behind the struggles. Two good teams. Actually, in the Saints game the Giants' secondary -- weakened without Kenny Phillips and Aaron Ross -- got exposed. Last week was really a poor offensive performance, probably the first bad one of the season. So, it's been a combination of things. In reality, they just haven't looked like the Giants the past couple of weeks -- not dominant defensively or efficient offensively.


This question may very well be part of the answer to the last question... but the Giants are ranked dead last in the NFL in red zone defense. How is that possible for a unit that's been so good for all these years?

It's really an interesting question. I know Tom Coughlin talked about it this week, and he doesn't have an answer. It really comes down to this -- the Giants are No. 1 in the league on defense in terms of yards allowed per game at 262. But, they really have not been that good. The better teams have been able to exploit the Giants weaknesses. First and foremost that means finding safety C.C. Brown -- Phillips' replacement -- and throwing the ball at him. He is horrific in coverage, if you can call what he does coverage. Of more concern, though, is the defensive line. The Giants are trying to pressure with four quite often, and that group is under-achieving. So, I don't think the problem is specific to the red zone. I think the red zone numbers show you that this defense has not been as dominant as its reputation, and ranking, might lead you to believe.


Let's stick with that Red Zone theme... The Giants offense is 27th in the league in red zone efficiency. It seems like all too often they settle for 3 points when they get inside the 20. What do you put that on?

A combination of things, I think. The wide receivers are still young and inexperienced. I think there have probably been a couple of miscommunications. The Giants also have more of a finesse offensive line that likes to pull and lead block, not go straight ahead. That's tough on the goal line. Thirdly, most Giants fans will answer this question by screaming that offensive coordinator Kevin Gilbride is an idiot. I will say that I think the Giants need to make better use of some of their weapons on the goal line, like big receivers Kevin Boss and Hakeem Nicks, and The Beast, Brandon Jacobs.


With all the injuries in the Giants secondary and the Eagles offense relying almost entirely on big plays through the air this year, do you see that as a mismatch?

Not necessarily a mismatch. There is really only one weak spot in the secondary -- injuries or no injuries. That weak spot, as I mentioned before, is C.C. Brown. He is a huge hitter who tackles well and plays the run well. He couldn't cover me, though, and I'm 49 years old and I've torn by Achilles tendon twice. The key for the Giants is to protect him by getting pressure. Unfortunately, they really haven't been getting to the quarterback enough the past couple of weeks.


This week we learned that Ahmad Bradshaw, who has been great for the Giants this year, has a cracked bone in his foot but is going to continue to try and play. Brandon Jacobs just hasn't been himself this year. Are you worried about Bradshaw's ability to finish this year and is there a reason Jacobs hasn't been the kind of player we've come to expect yet this year?

Sure. I seriously doubt Bradshaw will make it to the end of the year. As hard as he runs and as violently as he cuts and struggles once he is hit, sooner or later that bone is going to give out. Sadly, rest won't heal it. It looks like only surgery will. So, we just watch him and see how long he lasts. Fortunately, we have all been dying to see Danny Ware get a chance to play for the past couple of years. If and when he is called upon to help carry the load we feel confident he can do it. As for Jacobs, I don't think there is anything wrong with him. The past couple of weeks he has run very well (13 carries, 76 yards last week), he just has not had enough opportunities. As the Eagles will, teams have been stuffing eight and nine guys at the line of scrimmage -- and blitzing consistently. Jacobs popped a couple of good runs last week, and hopefully that will continue. Often, though, the Giants are seeing that look at the line of scrimmage and checking to pass.