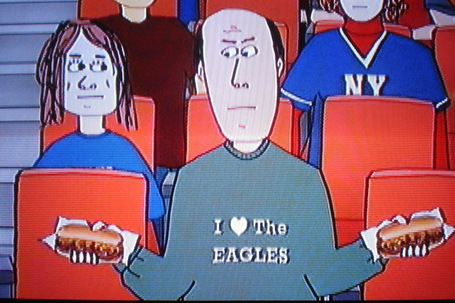 We've reached day 3 of the great blogsummit between Bleeding Green Nation and the Giants' site Big Blue View. If you missed them, check out part one and part two.

Today we talk about health, teams we don't like, act like east coast NFC East elitiests, and reveal the one reason an Eagles fan might root for the Giants(not this Sunday though!).

BBV - Brandon Jacobs practiced Wednesday for the Giants and appears ready to go. So, it appears right now that the Giants should have everybody ready to go on Sunday. The only guy who seems limited at all is defensive tackle Barry Cofield (knee), and we aren't sure about that. What about the Eagles? Anybody out? Anybody uncertain or limited?

BGN - As far as I know everyone is as healthy as you're going to get at this point in the year. Westbrook won't practice and will be questionable come gametime, but he's been that way for 3 years. TE LJ Smith should return this week after missing last week's game, you may remember that Smith had what was probably his best game of the year against the Giants in week 14. Also 2nd year DE Victor Abiamiri should be back as well. Until he got hurt a couple weeks ago he was having a very good second half to the season....

I hear those DEs from Notre Dame finish well... :)

So am I being an east coast biased NFC East elitist by saying that I think this is the best and most compelling game of the weekend?

BBV - Well, of course you are. But, since I agree with you we can be 'East Coast elitists' together. Really, in the NFC would anybody care about an Arizona-Carolina game if it wasn't a playoff game? Shoot, just tell me the final score. I don't need to watch it. In the AFC, Baltimore-Tennessee is a nice game, but what's the big storyline? I can't find it. Pittsburgh-San Diego is another nice game, but there isn't the history between those two teams that you get with Giants-Eagles. That's what makes this special. We know each other, we have built-in rivalries. Shoot, face it, no matter which team loses Sunday it will hurt that team's fan base even more simply because of the opponent.

BGN - After the Minnesota game several Vikings fans came over to our site and said they'd be rooting for us for the remainder of the playoffs. My guess is that won't be the case for the loser of this game... Although that said, there were more than a few Eagles fans that admitted to rooting for the Giants in last year's superbowl simply because they despised the Patriots so much.

I suppose that's what it takes for an Eagles fan to pull for the Giants. The pure evil that was the Patriots... Outside of the NFC East, who are the teams that you really just don't like?

BBV - Outside of the NFC East? I honestly don't spend much time working up hatred for any of the teams outside the division. I am old enough to remember the days when the Giants biggest rival was actually the San Francisco 49ers, and I guess it doesn't bother me that they stink. That's about it. The team I hate the most is the Dallas Cowboys, plain and simple. I think most of the folks at BBV would say the same thing. The owner is an arrogant jerk, but the biggest issue we have is the fan base. It's largely a spoiled, arrogant, unrealistic, entitled group that loves to trash talk and likes to believe they are still 'the team' in the NFL. Despite the fact they haven't won a playoff game since 1996.

BGN - I think we can all agree that we hate the Cowboys.