Heckert to interview with Browns

Share All sharing options for: Heckert to interview with Browns

Last week we reported that Tom Heckert was emerging as a possible candidate for a few jobs around the NFL, but his interest in some(cough Detroit) was very low. However it seems that he thinks Cleveland is more attractive than Detroit.... 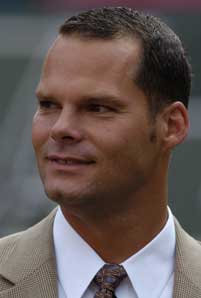 The meeting between Browns owner Randy Lerner and Heckert, who has been with the Eagles since 2001, has not yet been scheduled. The Eagles are getting ready for Sunday's playoff game against the New York Giants, but it is not known if Lerner will sit down with Heckert before or after the game.

Heckert has been the Eagles' GM since 2006 after originally joining the team as the director of player personnel. In May, he received a contract extension through 2011. Last year, he interviewed for Atlanta's GM job, a position that went to Thomas Dimitroff.

The Browns have also interviewed Scott Pioli from New England and wil speak with George Kokinis from Baltimore, who reportedly could be the frontrunner.

Since Heckert does not have final say in personell matters, he is allowed to interview for other GM jobs that would give him greater power.