Eagles miracle run continues with road win over the Vikings

Share All sharing options for: Eagles miracle run continues with road win over the Vikings 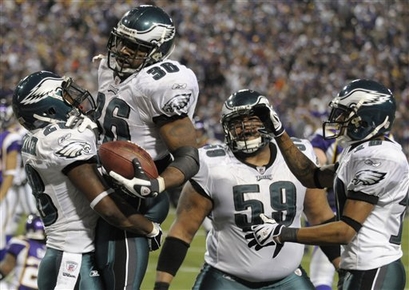 Nail biter til the end

This sure wasn't like the Dallas game. This one was anyone's game until very late in the 4th quarter. As anyone in the open thread will attest, early in the 3rd quarter I said that I thought the next score would win the game. The defenses looked that good and the offenses looked that bad... Turns out I was right. That next score came from a bit of magic by the guy that has rescued us time after time over the past 7 seasons...

Brian Westbrook caught a simple little screen, set up his blocks in front of him and weaved his way downfield for a score. Reminded a lot of that play against Tampa a few years back, although that game didn't end this well... Kudos to Kevin Curtis for the big pancake block downfield to pave the way.

That's pretty much exactly what we signed Asante Samuel for didn't we? We gave him the big bucks because he's a guy who makes big picks in big games. With his pick 6 today, Asante set an NFL record.

Asante Samuel returned an interception 44 yards for a touchdown against the Vikings on Sunday, the Philadelphia cornerback's NFL-record fourth return for a score in the postseason.

The guy is simply one of the best in the business... When you combine him with the way Chris Clemons has played in the second half of this year(and today) that first weekend of free agency last year looks like a hell of a coup for the Eagles.

Samuel is just one postseason INT away from tying that all time mark as well.

Once again the defense carries us

So far, all the evidence over the past 2 months points to this Eagles defense as being championship caliber. The offense continues to be feast or famine, but the defense has been an absolute rock. Adrian Peterson, the league's leading rusher, was held in check on all but one play where he gained half of his rushing total for the day. Jim Johnson confused and harassed the young Tavaris Jackson forcing a pick 6, and two fumbles(depending on who you charge that last one too). He was hit time after time and forced in to bad throws... When the pressure really was on after the Westbrook TD, Jim Johnson really let loose on the kid.

The VIkings ended up gaining just over 4 yard per pass play.

Not without it's low lights

There's no doubt that there were frustrating things about this game, particularly on the offensive side of the ball. I don't think McNabb played particularly bad considering that he was the victim of some pretty poor offensive line play at times... and the despite the fact that the Eagles honestly tried, the run game could never get going.

This isn't a game where you can kill the playcalling and balance too much. The Eagles threw 34 times and rushed 24. That's not a bad ratio. I really think a lot of credit has to go to the Vikings. They weren't the best run defense in the league by accident. They shut down our run game and Jared Allen was fantastic getting after McNabb. We won't face any run defenses better than the Vikes and we'll face few pass rushers better than Allen.

Nearly every Eagles offensive score was the result of a big play. The 61 yard Desean Jackson punt return led to a FG after the Eagles couldn't manage one first down. The 27 yard Buckhalter run set up a FG, and the 71 yard Westbrook TD... Not once did the Eagle smethodically march down the field to score. Now, we all love to see the big plays and we'll need more of them to get to the superbowl... but they can't be our only source of offense.

Thumbs up to special teams

I thought there were three great performances on special teams today.

First Akers. He was 4 for 4 with 2 of those kicks being from 40+ yards and one being from 50+. His long kicks would have been good from 60+ today and his kickoffs were very deep. HIs fantastic night in the dome should have his confidence high as we head to windy Giants' stadium next week.

Second Rocca. The Aussie punted 4 times today and put all 4 inside the 20, including a spectacular 51 yarder. What more can you ask for?

Third, Jackson. We knew this would be a matchup the Eagles could exploit. The Vikings finished this season as the worst punt coverage unit in the NFL. Desean Jackson wasted no time taking advantage as he returned the first punt 61 yards setting up an Eagles FG. He added a 30+ yard return later in the game.

The bearded man is now 7-0 in the opening round of the NFL playoffs.

Bring on the Giants!

We split with the Giants this year with each team winning on the road. The Eagles beat the Giants five weeks ago in New York... but that win means little right now. Records go out the window, previous meetings go out the window... This an old school NFC east posteason showdown that will be decided on heart and desire alone. I can't wait!