Lurie: Reid and McNabb will be back

Share All sharing options for: Lurie: Reid and McNabb will be back 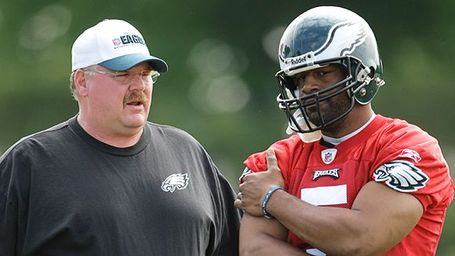 Speaking to the Boston Globe this week(because apparently there are no papers in Philly that would be interested) Eagles owner Jeff Lurie basically put to rest any speculation as to the future of Donovan McNabb in Philadelphia.

Said Lurie, "Donovan has had a very good year, but it also has had its ups and downs. You have to know, in this sport, especially at the quarterback position, you're going to have your ups and downs. Hopefully the ups are predominant, and he's proven with him at quarterback, you have a very good chance of winning and winning big."

Lurie added that the Eagles have "every intention of having him back" and that "he's been great to work with." McNabb's contract runs through the 2010 season, and calls for him to earn $9.2 million in 2009 base salary and $10 million in 2010.

Lurie also quashed any speculation about the future of Andy Reid.

"With Andy's leadership, we were in four straight NFC championship games and a Super Bowl," Lurie explained, when asked why he's resisted some external pressure to consider a change. "We haven't won a championship, but the quality of coaching and the quality of the performance of the team has been at a very high level.

"I think if you know you have really good coaching, you want to surround it the best possible way. That's more where we're at - try to keep improving the team, try to maximize all our resources, and think strategically. It's not about making the coach the target of frustration."

So there you have it... I think Lurie was pretty clear and didn't leave a whole lot for interpretation. It seems like the McNabb/Reid combo will be back for an 11th season together. Thoughts?