Share All sharing options for: Eagles shake up coaching staff 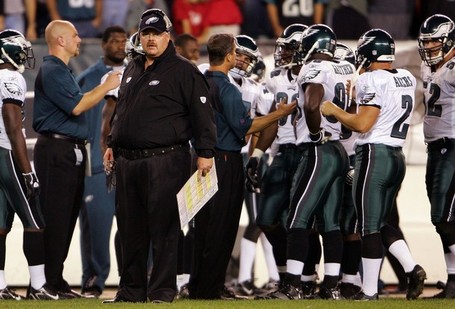 Change has come to the Eagles coaching staff. With a few members of the staff getting bigger jobs elsewhere, retirements, and other factors Andy Reid had some work to do shaping up his coaching staff this offseason. Today, the team had some announcements to make...

- Ted Daisher, who was formerly the Browns' ST coordinator has been brought on to head up the Eagles' special teams. Daisher was previously an assistant here. In 2007, under Daisher's tutelage, Josh Cribbs led the NFL in kick returns.

- Rory Segrest, who has been the special teams' coordinator here for the past two years has been named defensive line coach where he will replace the retiring Pete Jenkins. Jenkins is highly thought of around the league and has been credited with being a major factor in the development of guys like Trent Cole, Mike Patterson, and Broderick Bunkley. Before Segrest became ST coordinator, he was an assistant defensive line coach here.

- James Urban has been named the team's QB coach. Urban has spent the last 4 years here as an offensive assistant. I had previously guessed that Doug Pederson was being brought here to coach the QBs, but he will instead be an offensive quality control assistant. Undoubtedly he will do some work with the QBs. Urban replaces Pat Shurmur who left to join Steve Spagnuluo as the Rams' offensive coordinator.

It's also been reported that WR coach David Culley will get an expanded role in the offensive game planning.