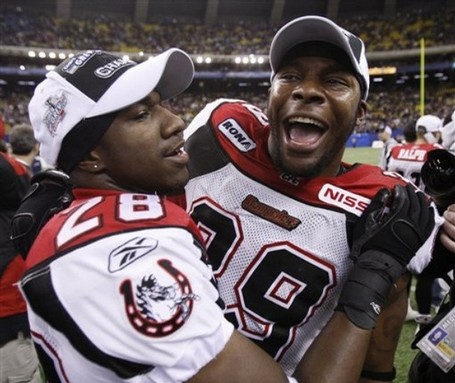 The Eagles have signed a pair of Canadian Football League standouts to contracts this week. This is the time of year when several NFL clubs will take fliers on guys from the CFL and elsewhere and sign them to developmental contracts. First was cornerback Byron Parker of the Toronto Argonauts.

Byron Parker has received little more than a contract from the Philadelphia Eagles. There are no guarantees he will make the team out of training camp, no promises he will collect a cent of his base salary, but the mere opportunity was enough to lure him away from the Toronto Argonauts.

The 27-year-old cornerback has signed a three-year deal with the National Football League team, a contract his agent said includes a signing bonus, a workout bonus and a reporting bonus. The minimum salary for an NFL rookie will be US$310,000 this year.

"He and I talked about it," agent Lance Riddle said yesterday. "And, as tough as it was emotionally for him to leave, the CFL can't compete financially with the NFL."

Parker had worked out for several NFL teams over the past month before he signed with the Eagles. Parker has previously been with Jacksonville and Dallas and is a two time CFL all star. He also holds the CFL record for the most interception return yardage in a season. The weirdest bit about Parker in the story however is this...

"It could represent financial security for him and his two wives," Riddle said. "But it was a very difficult decision for Byron to make. I think, if Toronto had put together a very aggressive package, I think Byron would have made the decision to stay in Toronto."

His two wives? If you'd like to see Parker posing shirtless with a Phillies' Jacket on while giving a "blue steel" look... click here. Apparently, he's also some sort of amateur model.

"Oh, man, I don't even know what to do with myself right now," said Hughes, 25, from his off-sea-son home in Detroit. " I don't know whether to jump around and start running or just sit down and say, 'Thank you,' and accept it."

Despite playing just 15 games (he also missed the season finale with an injury), Hughes led the Canadian Football League in tackles for a loss with 12, tied for the team lead in sacks (five) and fumble recoveries (two) while finishing second in tackles with 66.

The Eagles were not the only team Hughes worked out for this offseason. He had a pretty colorful way of describing his last two workouts...

"I worked out with Tampa and Buffalo and they both went downhill quicker than an oiled-up J-Lo down a ski slope, not as good as I wanted them to be," said Hughes. "I felt I could have been a lot better in both workouts. But on my way to Philly, I felt like this has to be the one. I felt like I was going to have a good workout, I felt like I was going to do everything, I was probably the best shape I've been in since I started working out. And it was the one."

Oiled up Jennifer Lopez eh? These guys are both longshots to even make it to training camp, but who knows? These are two pretty odd characters.