Share All sharing options for: Seven Eagles named to "All Joe Team" 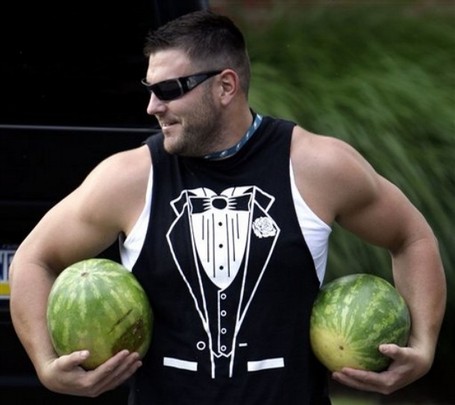 I've never really heard of the "All Joe Team" before, but apparently it's something that the USA today does every year.

The 17th annual All-Joe team honors the overlooked, the overachievers, the hard-working guys named "Joe" (but not the Plumber) who don't grab the headlines.

The All-Joe team, however, has become a springboard to the Pro Bowl. Tennessee Titans cornerback Cortland Finnegan and Dallas Cowboys nose tackle Jay Ratliff earned All-Joe honors last year and both were named to the Pro Bowl for the first time for their 2008 body of work. Same goes for New York Jets kick returner Leon Washington.

Anyway... a bunch of Eagles made the team.

OG: Todd Herremans, Phi. Former tackle in fourth year at left guard may have been Eagles' most consistent blocker;

DT:  Mike Patterson, Phi. He and Broderick Bunkley anchored the inside for a defense that allowed 92.5 rushing yards a game. A shared honor here.

Always nice to see guys get some national media love.