Share All sharing options for: Joe Banner reflects on 2008 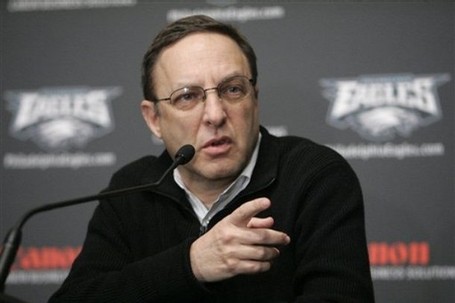 There's only one guy in this Eagles' organization(other than the owner) with more power than Andy Reid. That's team president Joe Banner.

Banner is Jeff Lurie's right hand man in the organization. He controls the money, he manages the cap, and more than a few Eagles fans think he's the real guy saying who comes and goes... So when Banner speaks, it's important to listen. This week he sat down with his own staff at PE.com to talk about the season.

First reaction always is that we didn't hit our ultimate goal, which is to win a superbowl. It continues to be dissapointing to not be able to check that off and work on number 2. On the other hand there's just a lot of positive things to feel about the 2008 season. Once again the fact that character matters, chemistry matters, getting people that have a good work ethic and care deeply about winning has been the foundation of our philosophy since Andy got here. I think it was proven again to be the right foundation.

I will remember it as a year that was kinda up and down. I started the season very optimistic. Came out and played really well the first few games then had a litte bit of a dip. Then got back on track and had another dip. Then obviously had to get a little bit lucky to get into the playoffs and then had another little run going. The season ended kinda the way it had gone. I felt like the arizona game was a microcasm of the whole season. We dug ourselves a hole, managed to get out of it but in the end couldn't quite cross the finish line that we'd hoped for.

He went on... but that's the gist of it. The Eagles' website promises more sitdowns with Banner in the coming weeks.