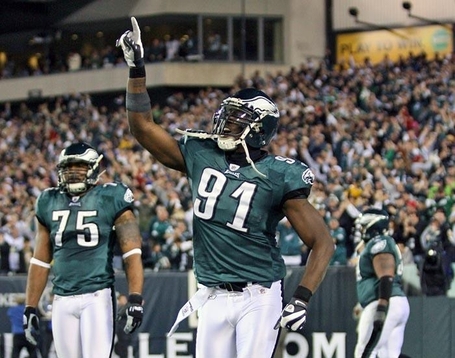 Chris Clemons, who was named NFC defensive player of the week, has been on quite a tear in the second half of the season. He's played more and more snaps since midseason and has translated that increased playing time into increased production. Jim Johnson has taken note.

He was banged up a little bit and got off to a bad start, and I think the confidence of not knowing the defense was there," Johnson said. "The more he got to work at that position - we worked him in the joker a little bit - he felt more comfortable. I think the last six or seven weeks, he's really come around pretty good. He just missed a lot of training camp, and not being in shape also hurt him."

If the Eagles can stop the Vikings rush attack on first and second downs and force pass situations on 3rd downs... Clemons will be a big part of Johnsons' efforts to confuse and rattle young Vikings' QB Tavaris Jackson.

When Adrian Peterson was asked who on the Eagles defense do the Vikings need to neutralize, he was pretty clear.

"Cole," the Vikings running back said on a conference call the other day, referring to defensive end Trent Cole. "He's a beast, man. You see what he does coming off the edge. He makes a lot of plays. He's a guy who goes 100 miles an hour on every play. That's a guy you definitely have to account for."

Brian Dawkins is another, Peterson added. "With Dawkins," he said, "not only does he lay the wood on you coming north and south, he's also a ball searcher. He's coming in and trying to create turnovers."

When the Eagles traveled to Minnesota last year, Peterson was held to just 70 yards on 20 carries.