Five questions with the Cardinals - Part 1

Share All sharing options for: Five questions with the Cardinals - Part 1

Well here we are. It's Friday, we've got an NFC title game this weekend and I can't imagine much work is getting done in and around Philadelphia today. 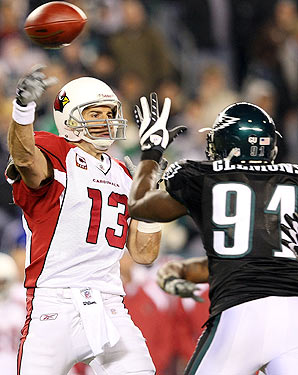 So today myself and CGolden of the great Arizona Cardinals blog, Revenge of the Birds exchange 5 questions ahead our teams' NFC title clash this Sunday. Be sure to keep an eye out over there for my answers to his particularly good questions.

Revenge of the Birds is home to several bloggers, so I'll be posting their answers to these same questions tomorrow.

BGN - The phrase we keep hearing about the Cardinals now as opposed to when they lost 48-20 to the Eagles on Thanksgiving is that "it's not the same team." Clearly the results seems to support that... but why aren't they the same team? What has changed?

RotB - That's probably a more difficult question to answer than you'd expect but here goes. I know you guys are probably beaten down by the "we traveled cross country on a short week" argument but that is the biggest thing that I'd point toward. I understand that the Eagles were also on a short week, but the Cardinals have always been a team that doesn't travel well. Add that fact to a young team that is accustomed to underachieving and the result isn't quite as shocking as it seemed at the time. I guess the next question is would the game have turned out differently if it was in Arizona? Honestly, I could still see the Eagles beating them in the same situations because they're a veteran-laden, battle tested, mentally tough team. Throwing a team trying to crawl out of futility into a adverse situation backfired on the Cardinals. Are they a tougher team mentally a month and a half later? We'll see, but they will look like a different club this Sunday.

Other factors that played into the blowout that could swing the Cardinals way this Sunday: despite being a pass-heavy team, the Cardinals don't play well from behind, Dominique Rodgers-Cromartie is growing fast and he's been almost 'shut-down' in the playoffs, and the Cardinals front seven has been fantastic at shutting down the Falcons and Panthers running game.

What percentage of credit do you give the Cardinals defense for the disastrous performance Jake Delhomme put on in the divisional round? How much of it was just him playing poorly?

Obviously Jake didn't play well and he cost the Panthers the game. Who's responsible for that poor play is going to be a subjective answer but in an effort to be fair and unbiased, I'll say 67/33 Cardinals defense. If you re-watch the highlights of the game on NFL.com (it shows all five picks and his fumble), you'll see that on his first three picks he was either about to be hit or was throwing with a defender right in his face. The fumble was simply a guy who spun out of a block and knocked the ball loose as Jake is looking down field. By the fourth quarter Jake looked awful rattled and his final two picks were simply terrible throws and he had a decent pocket on both. With all that being said, Jake was sacked twice, one resulting in a fumble and three of his five picks were a result of hurried throws because he was under immense pressure.

Much like the Eagles, the Cardinals spent the year being a pass happy team that didn't have much balance and largely ignored the run. However, much like the Eagles the Cards have discovered new balance in the playoffs and it's worked for them. What do you contribute this new found balance to?

That's another tough question because there was no indication, either before the playoffs or since, that they were going to renew their commitment to the running game. At times during the season head coach Ken Whisenhunt made some statements that he wasn't concerned about the running game because their short passing game was controlling the clock and they still have a top 3 offense, surprising statements from a former-Steelers' coach. At the back of his mind though, I think he always knew that they'd have to run the ball at some point to get over the hump. There were some indications towards the end of the season that they were headed in that direction (7 runs and 2 passes in the 1st quarter against New England), but they fell behind so fast in three of the final five games that they had to abandon the run. The biggest reason that they've run the ball so well in the playoffs is the result of one factor: they were either leading or tied for most of both games. When they're in a tight game, they're going to run the ball, but if they get down a couple of score early, they'll air it out on nearly every down.

Ex Eagles and current Cardinal TE Stephen Spach is out for this game and it appears Boldin will be back. What effect if any will Spach's absence have on the run and pass game? Could Boldin's return possibly entice the Cards to throw more and get away from the balance we've seen in this postseason?

Wow, who'd have thought that Stephen Spach would get his own playoff question. Spach had been a god-send the past month and a half and his presence will certainly be missed. He looked like the guy that Whisenhunt had been looking for since he got here. Spach was an above average blocker and despite not being very athletic, he always seemed to make a big catch. The Cardinals don't ask much of their tight ends but Spach filled that role very well. Jerame Tuman was resigned and I'd guess that he'll fill Spach's blocking role and some combination of Leonard Pope and Ben Patrick will fill whatever receiving role there might be.

Boldin's return will be huge for Kurt Warner and the passing game, there's no doubt about that, but I would be shocked if they throw more in an effort to appease him. His effect won't be on play calling as much as it'll be on how the Eagles secondary chooses to attack Fitz, Q, and Breaston. Fitz had a monster game last week and I expect his reception and yardage will go down as Warner distributes the ball to his play makers. Steve Breaston might actually have a better game as he's able to slide back into the slot, which suits him better.

The first road game the Cardinals won outside of the NFC West all year came ust last week. However, at home you've lost just twice. What do you attribute the difference in home/road performance this year?

First, I'd say it's easier to play at home. Guys are more comfortable and there are less distractions. For  a team that, lets face it, is not very 'mentally tough' yet, that's a huge factor. The other factor is the crowd, as in the case with most teams. The team feeds off a raucous crowd and they're a huge reason why the Cardinals are 13-4 in this building in the past two seasons. It also doesn't hurt that they keep the roof closed most of time b/c it's pretty common knowledge that KW is much better in a controlled environment.

Quick bonus... Both of these teams have thrived on playing the underdog so far in this postseason. The Eagles are slight favorites this weekend, but the Cards are the team hosting the NFC title game. Who gets to play the underdog this time around?

The favored team can't be the underdog can they? No, I get what you're saying. Both teams cling to the 'us against the world' mentality but I think the Cardinals have more of an underdog argument in this case. They're certainly taking the role to heart.

Thanks again to Revenge of the Birds and be sure to check out their site for my answers to their questions.