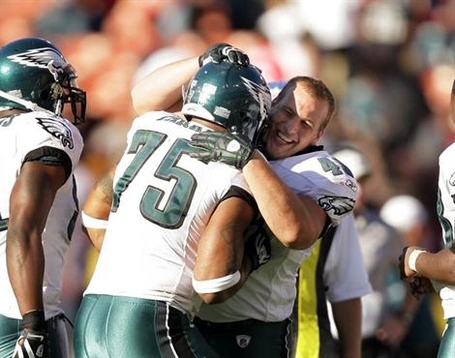 I got an email from Esquire magazine tipping me off to a feature they did on none other than Dan Klecko.

There's no doubt that Klecko's an interesting study. The guy has been little more than a role player for his career, yet he's got 3 superbowl rings with 4 teams. If he were to win one with the Eagles this year he'd enter to the hallowed company of Joe Montana and Terry Bradshaw as one of the few players in NFL history with 4 superbowl rings...

Another crazy stat... Dan Klecko has never lost a playoff game he's been active for. Of course, you wouldn't know by looking at him.

It's an interesting profile of a guy who has been an unheralded, but important part of this Eagles team. Plus, the article references his "doughy physique" and refers to him as "social lubricant."

The Curious Case of Dan Klecko