The Eagles Fancast boys will be guests on NPR this weekend to talk about being Eagles fans. Check it out this saturday between 5-6 on NPR.org (Eagles Fancast) 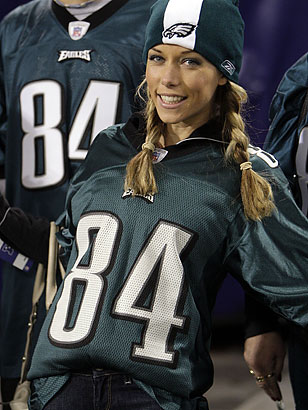 An epic preview of the NFC title game has gone up on over at Iggles Blog. (Iggles Blog)

As the Eagles prepare for their 5th NFC title game in the past 8 years, a look back at the past 4 seems in order. (Inside the Iggles)

The Giants had three all pros on their offensive line, we had Broderick Bunkley. Too bad for them. (Bounty Bowl)

Yes the Cardinals have great WRs... luckily our secondary isn't too shabby. (Eaglesville)

Here's an interesting analysis about how well the Eagles defense has played when facing a QB for the second time this year. Doesn't bode well for Mr Warner. (Bleed Eagles Green)

Donovan McNabb says 32 is not old and really a QB's prime. Also he looks at himself like a fine wine. (700 Level)

McNabb posted on his own blog this week and compared this playoff run to his first. (Yardbarker)

What exactly has been up with Brian Westbrook lately? (The ADD show)

The mayor of Pittsburgh actually changed his name because it had "Raven" in it. Nice. (With Leather)

The Golden Globes were on a week ago, Megan Fox was there. Nuff said. (WWTDD)