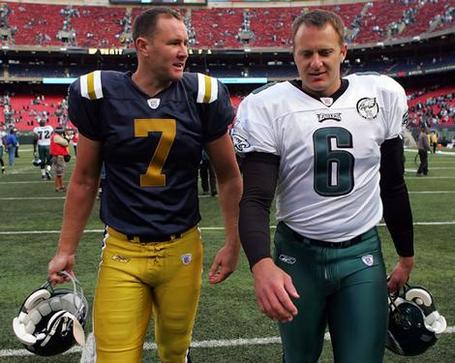 In 19 days the first Australian to ever play in the Superbowl will trot out on the field in Tampa.

No, I'm not being overconfident and guaranteeing that Sav Rocca and the Eagles will win this weekend. The Cardinals also feature an Aussie punter, Ben Graham, which guarantees one former AFL star will play in the NFL's big game.

Sav's brother Anthony, who still plays in Australia for Sav's former club the Collingwood Magpies, is excited for his brother.

"I've spoken to Sav and he's really excited about the way the team is playing and the fact they have advanced further in the playoffs,'' the Magpies forward said.

"But they're not in the Super Bowl yet, they have to beat Arizona. He's had a good season and is enjoying the experience and it would be great if they could win again and reach the Super Bowl.

"Plenty of the Collingwood boys have been keeping a close eye on how he's been going and will be watching the next game with a lot of interest.''

Sav's bro plans to make the trip to Tampa if indeed the Eagles win this weekend.

The NFC title game will be shown at 7am on Monday in Austrailia.