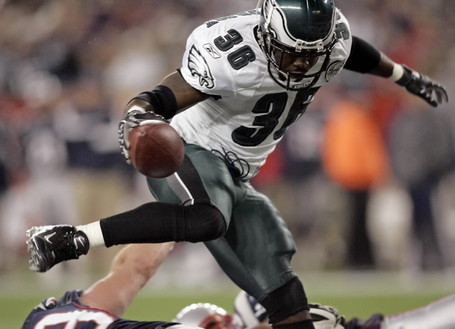 In the past two games the Eagles haven't run the ball particularly well. Amazingly, Andy has stuck with the run despite that. Still, it would be nice to see the run be effective and there's a debate over why it is.

One reason could certainly be that the Eagles played the best run defense in the NFL two weeks ago and another top 10 run defense(who also happened to be defending champs) this week. In other words, the other guys were just really good.

However, the general consensus seems to be that Westbrook has simply been too injured to be effective. Westbrook disagrees.

"You see the way teams are playing us now . . . they're going to load the box, eight or nine guys. For us, it's encouraging . . . that other people step up and have good games," said Westbrook, who caught just two passes for 10 yards against the Giants. "That's the true mark of a team.

"We faced a very good defense . . . one of the better defensive lines in the league. I think they paid extra attention to me, which allowed opportunities for other players . . . I don't feel injuries have had much to do with my production. I think I'm going out there as healthy as I've been, for the most part [lately]."

Giants' defensive coordinator Steve Spagnuluo made no secret of his intention to key on Westbrook after #36 put up 200 yards of offense on them a month prior. Many times during the game Joe Buck and Troy Aikman repeated Spags' "22 eyes on Westbrook" mantra.

Andy Reid pointed out that even when Buckhalter ran, he had trouble finding holes against the Giants as well.

"Yeah, he can be [effective]," Reid said. He added that Correll Buckhalter, who is healthy, gained only 7 yards on five carries against New York, suggesting the problem had more to do with blocking. "Buck's [numbers] weren't up there where they needed to be either, so we have to go back and do some things. And listen, to their credit, they put an extra guy up in the box. They clearly wanted to take Westbrook out of the game, which I understand after the last game," the 20-14 Eagles win Dec. 7, in which Westbrook accounted for 203 yards from scrimmage. "You have to make the adjustments and utilize what the other team is going to present to you.''

"At some point - I told Correll Buckhalter this the other day - we're going to have a breakout game," Westbrook said. "Hopefully it's in these next two games, and then this team will be on a whole 'nother level."