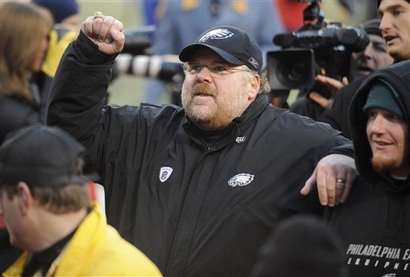 The can be no doubt about the two defining moments of this game for me. Two times in the 4th quarter the Giants had 4th down and less than one and both times the Eagles defense didn't give up an inch. Those are the kinds of defensive stands that legends are made of. For my money, they belong with "4th and 26" as some of the great moments in Eagles playoff history. 4th & 1 x 2?

Credit for those two stops has to go to Broderick Bunkley, who drove his man back and the play both times. The guy has had a great year locking down the interior of that Eagles' D and he deserves some national attention. His effort on those two plays should earn him that.

Last week, the Eagles victory was due to an amazing defensive performance and one great offensive play. This week, the defense certainly did it's job to great effect... but Donovan McNabb was sensational. In a game where Westbrook was completely shut down and the Eagles' running game couldn't do anything, McNabb took the team on his back in the second half and made plays. His efforts specifically on 3rd down were awe-inspiring. His escape plus throw to Avant for a first down on 3rd and 20 has to go down as one of the plays of the game, if not the entire postseason so far.

McNabb once again outplayed his opposing QB and once again the Eagles won. That's no coincidence. Five finished 22/40 for 217 yards, 1 TD and 1 rushing TD. He did have 2 picks on the day and that made his QB rating not so hot... but in the playoffs it's about making plays at big moments and winning games. That's what McNabb did today.

Eli Manning simply came up small today. What really was amazing to watch was how much he struggled with the wind and McNabb didn't. Clearly Manning doesn't have the arm that McNabb has(few guys do) but he didn't look like the QB with homefield advantage. You would think that the guy who has played his entire career in Giants' stadium would understand how to play it better than anyone else. Despite the Eagles rarely bringing the blitz and not sacking Manning once, Eli finished a dismal 15/29 for 169 yards and 2 INTs... one of which was returned by Asante Samuel to the one yard line setting up the Eagles' first TD.

And again, I must say... Asante Samuel = worth every cent.

Eli Manning wasn't the only Giant to struggle in the weather while his counterpart thrived. How about David Akers? He's perfect on the day in a stadium he's always struggled in. He sets the NFL record for consecutive FGs made in the postseason... all while his pro bowl counterpart John Carney misses two FGs and struggles to figure out the wind in his home stadium.

With the Eagles win in New York, road teams are now 3 for 3 in the divisional playoff round. Overall, road teams are 5-2 this postseason. That's a pretty decent omen for the Eagles as they get set to travel to Arizona to face the Cardinals for the chance to go to the superbowl.

We've all gotten frustrated at times. Whether it's been with Reid, with McNabb, with ownership ect... It's a week to week game and people's emotions are going to change week to week. When the Eagles got beat by the Ravens to send us to 5-5-1 with McNabb benched a short week against a playoff team in the Cardinals coming up... it wasn't wrong to be frustrated and it wasn't wrong to lose some faith.

That said, when you step back and reflect on the stat in this headline, we have to give Reid/McNabb/Lurie/Banner the credit they deserve. 5 NFC title games in 8 years is an amazing achievement. It's not the ultimate goal of winning the superbowl, but it's a level of success that nearly any other team in the NFL would be ecstatic with.