The trouble with David Akers

Share All sharing options for: The trouble with David Akers

If you happened to catch the Steelers/Ravens Monday Night game last night you probably say Steelers' kicker Jeff Reed hit a 46 yard FC in overtime to win the game. You may have also saw him open the scoring with a 49 yarder... If you're like me, after watching that you might have asked yourself "Could our kicker have won that game for us?" 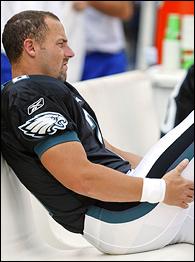 The answer these days is no.

The answer couldn't be clearer coming off a weekend when David Akers missed 2 kicks of over 40+ yards in a game the Eagles lost by only 4. Problem is, this is nothing new. Since he sustained that hamstring injury in 2005, Akers hasn't looked like the same player to me. It could be mental, it could be physical... I don't know... but I do know it's not good enough.

Akers used to be a weapon. He was damn near automatic. Reuben Frank's  numbers back that up.

Since then, he's made just 47 percent of his 40-yarders, including only three of 13 over the last two years. From 45 yards and out, Akers has missed his last seven attempts dating back to a 47-yarder at Lambeau Field on opening day last year. Until then, he had made 64 percent of his career kicks from 45 or deeper.

Frank notes that from inside the 40 Akers has made 32 straight kicks... that's fine, but the fact is that almost any NFL kicker is near automatic from inside the 40. Andy Reid was asked if he knew what was up with Akers.

"I think the leg strength is there. You can see it on his kickoffs. He's kicking the ball off as well as he ever has. For whatever the problem was, it has to get solved, so he and I will work on that."

Andy makes a good point. Akers has kicked off well and his long kicks sailed wide, they didn't fall short. Akers seemed short on ideas himself as to his struggles.

"I go out and try the opportunities that are presented to me," he said. "It's not like you can make the kicks from 39 yards and from 41 you're not able to make them. I'm just off a little bit.

"In this game, at my position, you can't be off. It's a precision-based position. You have to be able to hit them. If you don't, you're out of a job."

As for the specific reasons Sunday's kicks sailed wide, Akers said he misplayed the wind

"I actually just misplayed the wind, for the most part," he explained on Monday.

"I still feel I was right in my assessment," he said. "If there was a screw-up at all, I hit them too good.

"For the golfers out there, if you hit the ball kind of high in the air and let the wind take it, it affects the ball. Actually, I kind of drove it through the wind and it didn't have as much effect on it as I was anticipating."

You "hit them too good?" Maybe not the best choice of words...

The question now is... what to do? Since I'm no expert on kicking mechanics and clearly would have no suggestions about what Akers could do to improve himself... I have another idea.

Yes, accept that Akers is no longer reliable from distance. He may say he's just a little bit off, but the numbers don't lie. This guy has been a little bit off for a long time. At this point I don't think the team is best served by letting Akers kick from those distances and ceding 10 yards of field position. My proposal is to go Belicheck! If it's 4th down and managable distance and the Eagles are around that 30-35 yard line... why not just go for it?

Let's look at the cold hard facts. Akers has missed his last 7 attempts from over 45 yards. Does anyone think the offense wouldn't have a better percentage converting 4th downs than that? Since 2004 he's only made 47% of kicks over 40 yards. Last year the Eagles offense converted 60% of it's 4th down opportunites. I'd rather put my trust in Donovan McNabb and Brian Westbrook and risk giving the ball back at the 30 rather than trusting Akers and risking giving the ball back past the 40.

You guys tell me. Am I crazy?