Skip to main content
Breaking News The Eagles are 2-5.

Share All sharing options for: Eagles lose to Bears 24-20 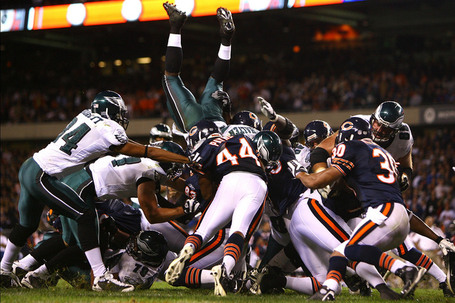 A miserable night for the Eagles offense as they fall to 2-2 and into the basement of the NFC East.

There's no doubt that the Bears defense played fantastic. They are incredibly tough at the point of attack controlled the line of scrimmage when we got inside the 20...How many times did the Eagles have first and goal inside the 5 and were unable to convert it to 7 points?

The Eagles had first and goal from the 2 yard line. A stuffed run, a McNabb trip, and an incomplete pass turned that into only 3 points. Then there was the one at the end with 4 straight runs that were stuffed(including a whiffed block by Schoebel). That was the game right there. Could the defense have played better in the first half? Sure... but the fact is that if the Eagles offense scores 7 points on either of those plays they likely win this game. Is there anyone, Bears fan and Eagles fan alike, that thinks the Bears would have come back if the Eagles had edged ahead at any point in that 4th quarter? Credit to the Bears defense for never letting it get that far.

Injuries were a factor

Taking nothing away from the Bears' D... you cannot tell me injuries didn't play a part. Sorry, but on the last goal line stand there's no way Westbrook doesn't score. We've see Westbrook score on that leap into the end zone many times. How may times have we seen Shawn Andrews maul someone at the line of scrimmage and open a hole at that spot? We've overcome the losses of one starter after the other one offense so far this year. Both starting WRs, all pro guard, starting TE... but tonight, the loss of Westbrook really was too much. Fact is that Westbrook lands in the end zone when he dives, unlike Buck. Fact is that you need perfect form and tackling technique to bring down Westbrook shy of a first down, unlike Lorenzo Booker who you seemingly just have to get a finger on to bring down.

It's not an excuse, it's just a fact of life. There's only a finite amount of guys a team can lose before it just can't keep up anymore. The Bears are too good a defense for the Eagles to walk into their house and expect to beat being down so many key guys.

Special teams NOT so special tonight

There's 3 more chances to have won this thing. Desean Jackson holds on there, our chances are prety good. If Akers makes even one of those 40+ yard kicks, we win this game. That would have allowed us to kick a FG to take the lead on that second to last drive rather than go for it on 4th down.

Fact is that Akers is a problem. Most kickers in this league are pretty much automatic from inside the 40. It's those 40+ yard kicks that seperate the average from the good. It's why Akers used to be a good kicker and why now he's just average.

At least the defense came to play

The defense, particularly the second did struggle in the first half of this game... but this defense absolutely played well enough to win. We saw yet another potent running attack absolutely shut down. Matt Forte had just 48 yards rushing and as a team the Bears managed just 78 yards on the ground.

Eagles offense gets 3 points out of that.

Up and down night for Desean Jackson

Certainly the lasting memory of this game as it relates to Jackson will be the muffed punt that led to a Bears' TD. But there was also the play early in the third where he ran one way and McNabb's pass went the other way leading to an easy Bears' pick. Clearly the play was a result of someone getting that play wrong... It was either the 10 year vet or the rookie. Juding by McNabb's reaction, it think it was pretty obvious who got that one wrong.

That said, the kid did some good stuff as well. He caught 5 passes for 71 yards including his first NFL TD. He had a couple of nice end arounds that went for a total of 35 yards. This is the problem with having to rely on a rookie as your primary playmaker on offense. Without Westbrook, Curtis, & LJ that clearly leaves Desean as the best playmaking option. We see Desean grow as a playmaker every week, but we have to live with the growing pains as well.

So we lick our wounds and try to heal up by next Sunday. If Westbrook isn't back by then, I'm not so sure we can expect a different result. The Skins are playing really well right now and we'll need all hands on deck to beat them next week.