The Bears are a good team.  They should be undefeated, but they've been vicitims of themselves so far this year.  What is wrong with their late game defense?  In the Colts game, the Bears defense looked fantastic, but in recent games they haven't been able to protect late game leads.

The Eagles could potentially be without two of their important weapons on offense. Brian Westbrook is a gametime decision and L.J. Smith has a bad back.  I think Brian is going to start, but L.J. is listed as doubtful and hasn't shown us much this year yet. I'd be surprised if he takes the field today and Brent Celek gets his first start of the year.

After the break, I run down three more things I'll be watching today.

In the projected starting lineups (pe.com link from 8-24) for the Bears-Eagles game, Reggie Brown and Hank Baskett are listed as the probable starters.  We all know that Hank has been performing like a legit starter in the NFL this year, but we have yet to see Reggie.

Last year was supposed to be the year Reggie Brown "broke out".  It didn't happen.  Reggie's numbers from last year were ok, and improved as the year went on, but he didn't morph into the dominating "young version of Marvin Harrison" that Donovan McNabb and the Eagle PR machine suggested he would.  Today, with Brian Westbrook and L.J. Smith gimpy at best, Reggie has the opportunity to take a step toward last year's expectations.  I certainly don't expect him to magically turn into Marvin today, but he's no longer on the Injury Report and I would like to see him active in the offense this week.

L.J. Smith is listed as doubtful for today's game so even if he does play we can expect to see a healthy dose of Brent Celek.  L.J. has recently come under fire from the media and fans for underperforming.  Bob Brookover even penned a "hey wait a minute" article in defense of the tight end.  It raises some interesting points about how the Eagles utilize their tight end in comparison to the rest of the league.

If L.J. isn't active Schoebel will be.  How often will the Eagles put him on the field.  Will Hank Baskett line up tight more today than in other games?  Hank often lines up outside of the tight end and is used as an extra blocker in the running game - today those skills may have to be called upon as more than just a gimick. Suddenly with L.J. hurt the tight end position looks pretty thin.

The Bears offense is heavily reliant upon the team being able to run the football.  If you don't believe me, just ask Lovie Smith (from pe.com):

"A lot of things we do are based on us being able to run the football," Smith said, "and as far as them being able to stop the run … they put a lot of pressure on the line of scrimmage."

With Kyle Orton the Bears QB and his most effective recievers the Bears TE's, I'm more than just a little willing to challenge the Bears to throw.

What is the 8 man box?  Brian Billick had a very interesting breakdown of the so called 8 man box on NFL Network's Playbook NFC show this week.  He described 8 in the box in a metaphoric rather than a literal sense.  To him it means 1 extra defender than available blockers for the running game.  The following graphic attempts to clarify that statement. 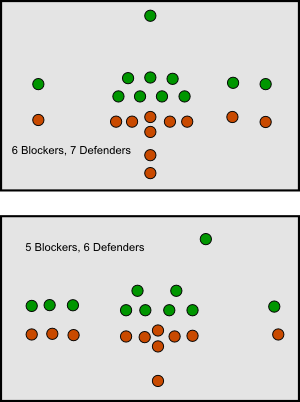 The Eagles have been tremendous against the run this year.  Today should be a statement game for them.  "8 men in the box" will force the Bears to throw the football, pitting their offensive weakness against one of our defensive strengths.  How often will Jim Johnson crowd the line of scrimage this way?  That's the third thing I'm watching.

This is a game which feels like a trap.  Overconfidence and injury could sneak up on this football team and result in a loss.  That said, I think the Eagles are vastly superior to the Bears.  Yes the Bears beat the Colts in week 1 and circumstances really conspired against them in weeks 2 and 3, however the Bears are a team that seem to be looking for ways to lose rather than finding ways to win.  The Eagles will show the Bears the way to lose today early in the first quarter with a quick pick 6.