Share All sharing options for: Eagles at Bears preview 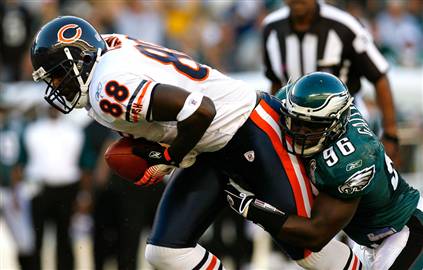 This week Donovan McNabb returns home to Chicago to face his favorite team growing up, the Chicago Bears, for the 6th time in his career. McNabb has a 4-1 record against the Bears, with the loss coming last year when the Bears drove 97 yards and scored with 9 seconds left to beat the Eagles 19-16. An unpleasant day for Eagles fans to say the least...

To be honest, injuries on both teams make this a pretty tough game to predict/preview. We know the Eagles injury news. Donovan McNabb, LJ Smith, Shawn Andrews, & Brian Westbrook have all not practiced this week with carious injuries. McNabb almost certainly will play, but he acknowledged this week that his chest contusion has not gotten any better. In fact, it's gotten more sore and more tight.

Brian Westbrook sounded rather optimisitic in his press conference this week about his chances to play. He said that he's been able to walk on his ankle and put pressure on it.

Andy Reid said this week that LJ Smith's availability this weekend would be "a reach," leaving the door open for Brent Celek to step into the starting lineup.

"I know I have to be ready," Celek said. "But there is still a chance L.J. will play, and that's what we want. For now, all I can do is prepare and try to make the most of any opportunity.

Shawn Andrews injury, as with everything related to Andrews, is pretty much a mystery. Reid did say that he thought Andrews has improved but gave no indication as to whether he might play this weekend or not.

The Bears are not without injury concerns either, with pro bowl return man Devin Hester a doubt for this weekend. Hester returned to practice Thursday but only in a limited capacity.

It was Hester's first action since he tore cartilage in his lower left rib area during the Week 2 loss at Carolina. His status for Sunday night's game against Philadelphia remains unclear.

"I'm pushing for it," Hester said. "I'm still sore. I'm going to get some more treatment. I'mhoping I'll be ready."

"Sometimes it takes weeks, sometimes two months," Hester said. "It all depends on the person and their body."

Whether he plays or not, Eagles ST coordinator Rory Segrest thinks they'll be ready

"We have a flexible plan," special teams coach Rory Segrest said. "Not to get into the plan, but he's a dangerous returner. You have to make sure you don't let him beat you by putting the ball in the end zone. Right now, we're planning on him being there and we will adjust if he's not."

Time to break out that immovable object/irresistible force cliche?

Rookie Matt Forte, who rushed for 2,127 yards as a senior at Tulane and was Chicago's second-round draft pick, debuted with 23 carries for 123 yards and a touchdown in the Bears' season-opening victory over Indianapolis. He had 89- and 92-yard performances in Chicago's losses to Charlotte and Tampa Bay. He also has a total of 13 catches for 105 yards.

''Matt Forte has done a super job for us,'' Smith said. ''When you have one tailback with a team like us, he'll get quite a few touches. He's caught the ball. He has vision. He's been a complete running back for us.''

The game should come down to this matchup. Everything Chicago does starts with the run. If they can't establish their ground game, they'll have to turn to Kyle Orton to win a game through the air... and that's not something the Bears want to do, especially not against the Eagles. Orton enters this game with a QB rating of 79, 2 TDs & 2 INTS, while throwing for less than 200 yards a game. Make no mistake about it, if the Bears win this game it will be done on the ground and Matt Forte will have had a big game.

On the other side of the ball it's hard to talk about matchups without knowing who among the Eagles walking wounded on offense will play. The generic analysis of the Bears defense is farily simple. You have to pass to beat them. Their pass defense hasn't been particularly poor, but their run defense has been fantastic giving up less than 80 yards per game on the ground.

The Bears are a tough team to figure out. They went on the road and really beat up on the Indianapolis Colts in a game nobody gave them a shot to win. However, the last two weeks the Bears have given up 4th quarter leads to lose at Carolina and home to Tampa. Playing at home, the Bears will be a desperate team. A 1-3 start to the year(with 3 conference losses) will be very tough for the Bears to overcome and I expect them to play like a team that knows that. This will be a very tough game on the road in primetime. A statement game on a national stage for both teams.