McNabb will play this weekend, Westbrook getting better

Share All sharing options for: McNabb will play this weekend, Westbrook getting better

Injuries have been the main topic of discussion all week down at the Novacare complex as 6 starters from the Eagles offense were on the injury report and 5 didn't practice. The only member of the walking wounded who did participate was Kevin Curtis, and he only did so in a limited capacity and will not play this weekend. 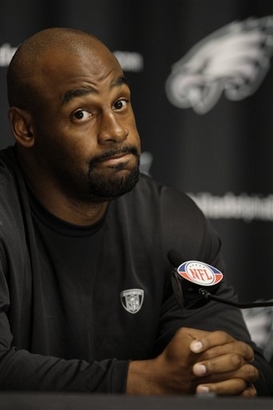 Donovan McNabb, who has been suffering from a chest contusion, left little doubt as to his intentions.

"I am (encouraged)," McNabb said yesterday. "But I know I still have a long way to go. I'm just trying to do the right thing and make sure I stay on top of it. ... There's not a chance in my head (I'll miss the game). I expect to be out there."

Reports are that while McNabb is still experiencing some tightness and soreness, it's not something that would prevent him from playing.

"I'm optimistic about getting out there and being able to play," Westbrook said. "I've been rehabbing pretty hard, pretty aggressively. I'm doing basically everything I can do be able to get out there on the field on Sunday night.

"I'm able to walk on it and put pressure on it, and do some different things. I've gotten better. I have definitely gotten better since Sunday, so I have that hope that I can get out there and play."

Westbrook has said that if by the end of the week he can run, he'll play.

LJ Smith also did not practice with a back injury, however Andy Reid says that's improving.

"That’s a plus," Reid said. "From there, it’s just a matter of his lower back area calming down enough to where he can function. It started to do that over the last couple days here. He is in a lot better shape than he was after the game."

Shawn Andrews isn't saying much about the back injury that kept him out of last week's game, although he revealed that he's had some frustrations in the course of his rehab.

"It can be troublesome at times," Andrews said yesterday. "You work so hard rehabbing and rehabbing, and you feel it getting loose, you feel it getting better, and then it comes back and gets you just when you think you've made it. If you don't have that [healthy] back, there's not much you can do physically."