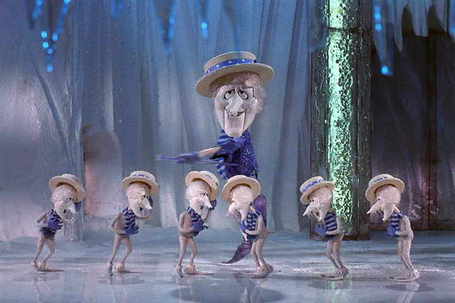 Andy Reid was asked in his day after press conference why he stuck with the run despite the fact the team gained only 5 yards on the first 9 carries. Was it a newfound commitment to sticking with the run?

''The weather conditions were probably the biggest factor,'' Eagles coach Andy Reid said Monday, explaining the thinking that went into the decision to call or check down to pass plays 35 times (30 throws, four scrambles, one sack) and running plays 37 times.

Asked if that meant fans who want to see a ground-based attack should hope for ''high winds'' over the final three regular-season games and what might be a playoff appearance, Reid smiled.

''I think the fans really just want to win,'' Reid said, without citing any results of a Quinnipiac poll. ''They don't really care if we throw it or run it. They want to see W's.''

Of course Andy is right... If the team wins we really don't care how they do it. However, we've seen a winning formula over the past couple games.

After hearing this many local writers were up in arms and ready to criticize Andy. He hasn't seen the light! He only ran the ball because of the wind!

I don't buy it. I hear what Andy said, but I'm not sure I buy it. As someone who has watched this team under his direction for the past 10 years I just don't buy that wind was the only reason the Eagles ran the ball 41 times. In the past 10 years neither snow, wind, rain, ice, nor loss of his starting QB has stopped big red from airing it out.

I know he says it was the weather... I just don't buy it.

Speaking of the run game, Correll Buckhalter should return Monday night against the Browns.  "He's doing better," Reid said. "He should go this week."