Share All sharing options for: Eagles turn the tables on Giants, win 20-14 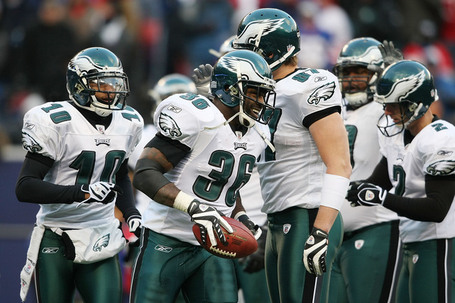 Mirror image of the last game

Did these two teams switch jerseys before the game or something? This game played out exactly opposite to the way the first game unfolded.

Like last time these teams met the score made the game look a lot closer than it was. The Eagles only won by 6, but totally outplayed the Giants today.

Another great effort from the defense

The Eagles defense has been quite a run recently and today was maybe their finest effort of the season. The Eagles defense allowed the Giants offense just score all day and that was a late cosmetic TD against the prevent. The Giants' vaunted rush attack which was so effective against us just 4 weeks ago was completely shut down today to the tune of 88 yards. The big difference was how well the Eagles sealed the edges today. Back in Philadelphia the Giants had nearly all of their rushing success off the edges, in fact that's where they've had most of their success all year. Today the DEs, particularly Trent Cole, and the LBs did a remarkable job stretching plays out and getting off blocks as the Giants tried to run off the edges.

This game featured the #3(Eagles) and #4(Giants) pass rushes in the NFL yet only one sack was recorded by either team. That sack came on a play where McNabb tripped after getting the snap and the Giants simply put a hand on him. Both teams got pretty good pressure on the QBs and forced some bad throws and scrambles, but the fact is that these teams sack the QB better than almost any team in the NFL. Just goes to show that in the NFL things never seem to play out like they are "supposed" to.

What an effort from Brian Westbrook and the Eagles offensive line. Westbrook had 33 carries for 131 yards & a TD to go along with 6 catches for 72 yards and a TD. When was the last time Westbrook carried the ball 33 times?

Westbrook's previous career high was last year when he carried the ball 32 times against the Dolphins. That was the only other time in his career he's had over 30 carries in a game. Of the Eagles 331 yards of total offense, Bran Westbrook accounted for 203 of them. The Egales offensive line absolutely dominated the Giants front 7 and Westbrook found every hole they opened up. If the difference in the Eagles run game the past two weeks really is because Marty Morninwheg is calling the plays... he should be the permanent play caller. This is a difference offense when he's calling it.

A tale of two Eagles

In the past few weeks I've singled out two specifical Eagles for a closer look. The first was David Akers. The gist of that article was as bad as Akers was to start the year, he's been flawless since the bye week. Although the stat sheet will look like he had a poor game today, I thought he did a great job. He hit a fantastic 51 yarder in an incredibly windy stadium that he's always struggled in. That's the signature kick that I wanted to see before I decided that Akers was "back." The two blocked kicks were clearly not his fault. I think most of us would agree that our confidence in Akers is much higher after today.

The other Eagle I singled out was Reggie Brown. Unlike the Akers article this was about a guy getting worse, not better. Today Reggie Brown was inactive. In recent weeks Reggie couldn't even get on the field, today in the biggest game of the yera he couldn't even get in a uniform. Andy Reid was aked about it after the game and danced around the question saying he needed to dress an extra RB... Fair enough, but that doesn't answer the question. You could have deactivated Greg Lewis, but you deactivated Brown.

Plaxico situation did matter to Pierce

We all know how well Burress has played against the Eagles in his career. I believe in 8 games he had 8 TDs. There's no doubt that the Giants' WR were very poor today and their QB looked pretty ordinary. Most likely Burress would have helped in a game like this. That said, the Giants have played several games without Burress this year and their WRs have played fine.

I think the biggest impact the Burress situtation had on this game was the effect it may have had on Antonion Pierce. Pierce has been questioned by police this week and had his car impounded after he helped Burress try to cover up the shooting. Pierce had a shocking day. For me, he was clearly the Giants' worst player today. When he wasn't commiting a boneheaded penalty, he was doing a poor job tackling, or just getting plain smoked by Brian Westbrook. He certainly didn't play like his head was in the game. I've never thought Pierce was anything special(not bad but not pro bowl level), but I've never seen him play as poor as he did today.

A day to celebrate

The Eagles still have a tough road ahead to the postseason. They still have no room for error, they could still use some help form one team or another... but today is a good day. Today we beat up the Giants, which is something we've been waiting too long to see.