Share All sharing options for: Army-Navy game: A Philadelphia Classic kicks off today 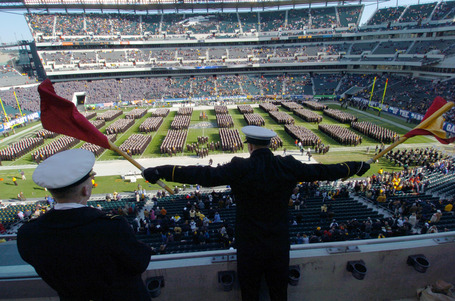 While the Eagles head up the turnpike to face the Giants on Sunday, their stadium will be filled to capacity for the 109th Army/Navy game. The Navy Midshipmen have won the last 6 matchups in the historic rivalry.

WEST POINT, N.Y. - One of college football's biggest rivalries will take place this weekend in Philadelphia when Army and Navy meet Saturday at noon at Lincoln Financial Field.

Saturday will mark the 109th meeting between the service academy rivals and a sold-out crowd, including President George W. Bush, is expected in Philadelphia. CBS will broadcast the game nationally while the Army Sports Network will have the radio call.