Were the twins on McNabb's mind?

Share All sharing options for: Were the twins on McNabb's mind? 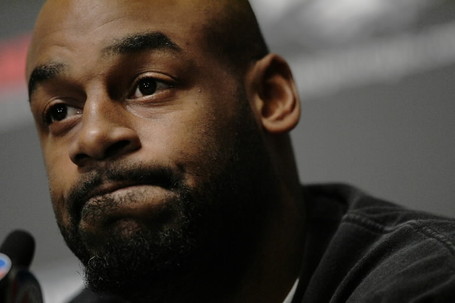 Donovan McNabb spoke to the media this week and the topic of discussion was the birth of his new twins. Ashley Fox recaps.

On Tuesday, three weeks before her due date, Roxie McNabb, the quarterback's wife, delivered twins, a healthy baby boy and girl. To hear McNabb tell it, the delivery was complicated but ultimately successful. Everyone is healthy - babies, mom and proud pop.

But there were times during the last several weeks and months when McNabb wondered, and worried, about his wife, about their 4-year-old daughter, Alexis, and about those unborn twins. Although he wouldn't go into specifics, McNabb worried about Roxie's health, about the strain carrying two babies put on her body, about whether those tots would be healthy or born too early.

"I tried to not let it affect my play knowing that I didn't play as well as I wanted to in the previous weeks," McNabb said yesterday. "But it's sort of a little weight off your shoulders knowing that everyone is healthy and everyone is fine and kind of can come back out here and have fun."

Fox said she thought McNabb would be "inhuman" if his wife's pregnancy wasn't weighing on his mind.

Not all memebers of the local media bought it. Rich Hoffman was skeptical.

In some ways, it is hard to believe that these worries would have affected McNabb on Sundays. The game is so fast and the adrenaline is pumping and the crowd is roaring and the bodies are hurtling past you, intent on mayhem. It is hard to see a player's mind wandering during that compressed period of intense action.

One other point: None of this explains the Arizona game on Thanksgiving night. In theory, all of the same concerns for his wife and the babies she was carrying, whatever those concerns were, would have existed that night, too - yet McNabb played a fabulous game, throwing accurately from the start, looking like his old self. His ability to compartmentalize during that game was fine.

So, as a neat-and-easy explanation for the way his play declined for the month before Thanksgiving - for the weeks of slow starts, and then the total debacles at Cincinnati and Baltimore followed by the great game against Arizona - this all falls a little bit short. At the same time, the very fact McNabb even brought it up is meaningful because it really isn't something he does.

Something Hoffman also brought up was the idea of preparation. We know that McNabb took a day off for personal reasons in the week leading up to the Bengal game. Obviously, that must have had to do with the pregnancy. Hoffman concedes that the difficult pregnancy certainly could have affected his preparation which certainly could have affected hs play.

So where do we fall on this? Have we found the source of McNabb's struggles against the Bengals and Ravens? Or does his stellar play against the Cards disprove the idea?