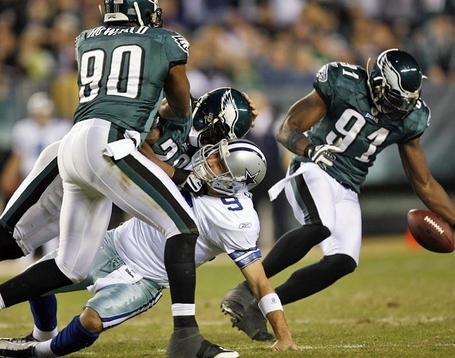 With the regular season over, I figured it would be worth checking out where the Eagles finished in some categories.

The story this year really has to be the defense. This unit was has really become one of the best in the NFL. They ended up as the 3rd overall ranked defense in football and the #1 defense in the NFC.

The best part is that this defense is incredibly young with only one free agent this offseason. The free agent also happens to be the only starter over 30, Brian Dawkins. We've got the makings of a dominant unit for years to come.

Stewart Bradley led the team in tackles with 108. Darren Howard ended the year with 10 sacks to lead the team. Amazingly, with only one double digit sack guy the Eagles defense still ended up with the 3rd most sacks in all of football.

The offense was up and down but ended up having a pretty good year on the whole. They ended up ranked 6th in the NFL in scoring with 26 points a game. Hopefuly in the future they arrive at 26 ppg by being more consistent and not scoring 6 points one week and 40 the next...

Desean Jackson led the team in receptions(62) and receiving yards(916), while also finishing 2nd in the NFL among rookies in both categories(behind Denver's Eddie Royal). Both were Eagles rookie records. Jackson also added almost a hundred yards rushing on 17 attempts.

Brian Westbrook finished tied for the 4th most TDs in the NFL. Donovan McNabb finished 7th in passing yards with a franchise record 3,916.