Share All sharing options for: One more celebration thread 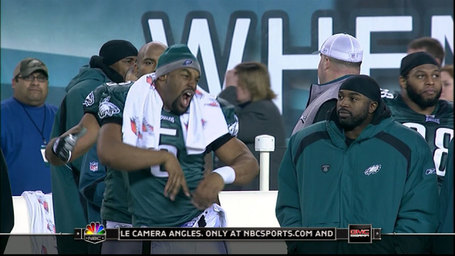 We'll soon be getting into the Minnesota game, but before then I think it's time to celebrate just a little bit longer...

How funny is look on Westbrook's face as he watches McNabb dance?

First, how about a little well deserved schadenfreude? (click the link for a fine definition!)

Cowboys bloggers are understandably incensed with their team writing articles such as, "Disgusting display by a bunch of losers" & "Coming to grips with reality". There's some particularly good stuff in that second artlcle.

The Cowboy youtubers are just priceless. These were all posted in the minutes following the game.. "Eagles crush Cowboys, Absolutely pathetic!", "Embarrassment doesn't even come close", and my favorite guy who picks the Eagles go deep in the NFC playoffs.

Cowboys fans are doing more than just blogging and vlogging to show their displeasure... One fan showed up at their practice facility with a sign that read,

The Cowboys have no heart, and coach Wade Phillips is an embarrassment to the star.

While Dallas players didn't have enough heart to get physical with the Eagles, they certainly didn't mind getting physical with their own fans... The sign holding man was attacked by linebacker Bradie James, who tore up the mans' sign and broke his sunglasses.

In addition to attacking their own fans, Dallas players also directed their anger at one another. Yesterday reports surfaced of yelling and finger pointing in the huddle, arguments on the sidelines, and even a fight on the plane ride home.

Here's Eagles fan, "themightyerock" berating the Cowboys as they walked off the field...

It really was a beautiful day wasn't it?

And finally, these two Eagles fans did a pretty great custom tribute song to the Eagles win over Dallas!