Kevin Kolb: "I want to be the guy"

Share All sharing options for: Kevin Kolb: "I want to be the guy" 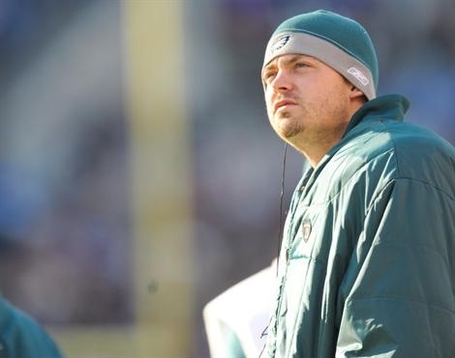 When Kevin Kolb was handed the starting job at halftime of the Ravens game, he apparently thought it was for good. However, the next morning he found out that wasn't the case... and he wasn't happy.

"I talked to Coach Reid the next morning in his office and I was upset," Kolb said. "I want to be the guy, and I think I can be, but at the same time, I respected his decision, and it has turned out pretty good so far."

Asked if there was a difference between respecting Reid's decision and agreeing with it, Kolb said, "A little bit, sure. I wanted to start. Of course."

Kolb wanted a chance to redeem himself after what was his first real NFL action in what most fans and pundits termed an almost impossible situation.

"That's the thing I was looking forward to -- getting back out there and getting that bad taste out of mouth," Kolb said. "Some of that happens with us playing good as a team, but it's still not as good as if you are out there yourself."

It's easy to see where Kolb is coming from. He's been waiting for the chance to start since the day he was drafted. He gets his first chance on the road after halftime with no notice against the Ravens, not surprisingly struggles and gets sent straight back to the bench. It makes total sense that he'd want to get right back out there proves he's better than he showed.

I like hearing this from Kolb. He's not AJ Feeley. He's not here to be a career backup. The guy believes he can be a starting QB in the NFL and he wants to show it. That's the attitude we want. The important thing now is for Kolb to let the frustration he might feel with his current role fuel him to be a better player.