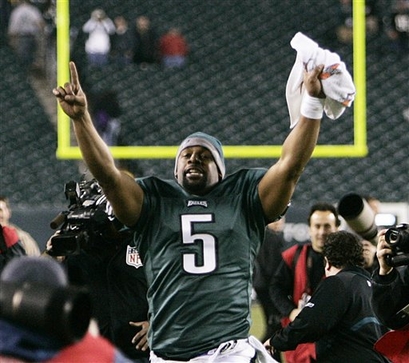 Did I think the Eagles could beat the Cowboys today? Sure. We've seen that this Eagles team is talented enough to beat any team in the NFL. Did I ever think it would be like this? Not in my wildest dreams. This was a complete and total domination. Dallas kicked the opening kickoff out of bounds and really looked out of sorts from that moment on. They were beaten soundly in every facet of the game. Romo had one of the worst games I've ever seen from a pro QB. The trade for Roy Williams looks right now like one of the biggest busts in history. The Dallas run game was shut down, their vaunted pass rush did nothing. It was the most complete victory the Eagles have had all year. On the other hand the Eagles' pass game, run game, defense... perfection.

Really, the second quarter decided the game. The Eagles outscored Dallas 24-0 in that quarter and the Cowboys quit. From there on out it was just a victory celebration in South Philadelphia. Even when Dallas showed the tiniest glimmer of hope on their first drive of the second half Chris Clemons(who was fantastic today) sacked Romo, and recovered his fumble for a 73 yard touchdown. The Eagles never let up.

Stat of the day

Against Dallas in the month of December, Andy Reid has never lost. That's the principle difference between these two teams. The Eagles can close, the Cowboys can't. The Eagles are and have always been a team about business first. They don't get up and celebrate every little tackle and act like they won the superbowl every week. Dallas does. This Eagles team knows that there is an ultimate goal of the regular season and that's making the post season. They never lost hope, they never forgot that. Credit to Reid, the coaches, and the leaders on this team for that.

Also Reid is 3-0 in the wildcard round of the playoffs...

What more can you say about Brian Dawkins? Two forced fumbles, a sack... He may be 35 years old, but can you name me 5 safeties better than him right now? Today was just another building block in the incredible legacy this guy has built over 13 years in this city. He's one of the best to ever play his position, one of the best to ever wear Eagles green... and we should treasure every game we get watch him. How fantastic was it to see him lead the chorus of "Fly Eagles Fly" time and time again tonight?

Here's a quick list of the records that fell today.

Bring on the Vikings!

Not much time to celebrate this great win. The business of the regular season is over and the business of the playoffs begin. We don't know exactly what day it will happen, but we do know who and where. The Eagles will travel up to Minnesota to face Brad Childress and the NFC North Champion Minnesota Vikings. We'll have much more on that game this week, but for now let's celebrate!

WE'RE IN THE PLAYOFFS AND WE SENT DALLAS HOME!