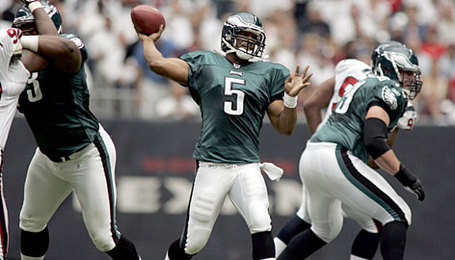 "I think I've played great," McNabb said. "I don't look at the stats aspect of it, but if you do, then it is better than it has been in years. Offensively, we've been able to do some good things, and some things, obviously, we would love to change. I don't regret any of the things that I've done this year. I'd love to do better in this game coming up ... Certain things are just an inch away, not getting a first down here, or whatever it may be. Obviously, if we were able to get that done, we wouldn't be sitting in this spot right now."

That's the quote which is the talk of Eagles nation this week. It snuck in on Wednesday after I left on my holiday travels and it appears I'm not the only fan to miss it.

The quote is what it is. Has Donovan McNabb played great? No, that's just a fact. He hasn't been bad, certainly not as bad some people have made him out to be, but there's no doubt that we've seen McNabb play better than he has this season.

But like I said... the quote is what it is. It's not his honest assessment of his play this year. It's his defense mechanism kicking in. He sees his position being encroached on, he hears the criticism, and he knows his safety net(contract) is gone. McNabb is signed through 2013, but after this year there is just a little over a million
worth of prorated money left on the deal. That means if the Eagles were to cut or trade McNabb this offseason it would cost the team about $1.2 million against the cap. In NFL dollars, that's nothing. After 2006, McNabb has no prorated money at all and his contract escalates to 10 mil, 12, 14, & 16 in 1013. However, since he reached certain incentives over the past few years, the lats three years of his contract are voidable. Even so, with no prorated money the Eagles could cut him at any time and take no cap hit whatsoever.

It's no surprise that McNabb also indicated he wants a new contract.

"Everybody wants a new deal," McNabb said Wednesday. "But, that's not why we're playing this game. We're playing this game to win and things happen. I've been answering this question the last couple of years, so I guess to eliminate that part of it, hopefully (a new contract) will happen, but we'll see."

The guy has a young QB behind him and no financial motivation for the team to keep him around. Clearly, what he would be looking for in a new deal would be more guaranteed money that would firm up his job as starting QB for the next several years.

Right now, McNabb is still pretty much saying the right things. He's indicated his interest in a new deal, but he hasn't drawn a line in the sand. He hasn't said "if you don't give me a new deal then someone else will." He still says he expects to return... but it will be interesting to see where this goes in the offseason.