Shawn Andrews talks about his injury

Share All sharing options for: Shawn Andrews talks about his injury 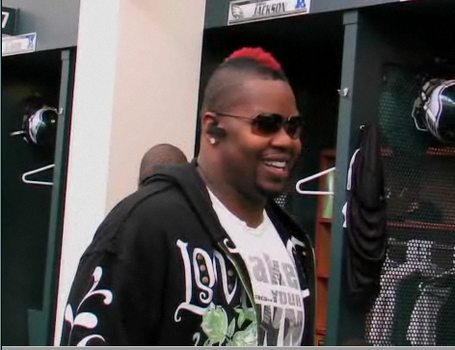 Shawn Andrews met the media yesterday and answered questions about his recent surgery and stay in California.

-- On why he had to remain in California, where the surgery was performed, for so long: "Dr. Watkins (his surgeon) recommended it. It was just some things that he saw, I guess, in the X-rays and the MRIs and the way that I told him I felt. So he used (that data as) a gauge and ... decided to keep me."

-- On if he thinks he'll play this year: "Well, you can hope all you want, and I do hope. I don't know what the possibilities are, so I'm back here and working with (trainer) Rick (Burkholder) and the guys, so now it's a matter of getting to that point where I can get out there and push and pull and take some people out."

-- On the feeling of returning to the team: "It's a breath of fresh air, it is. It almost kind of reminds me of preseason, like when my teammates were struggling the way they are and guys catching a lot of flak and me not being here to go through it and also I've gone through my set of problems as well. So it's all tough and it's good to be back and just to be back home in my own bed and just to be around the guys again. It's pretty cool."

-- On how the post-surgical complication of internal bleeding set him back: "I don't know. ... I followed the protocol. Doc said no BLTs -- bending, lifting or twisting -- and I followed that to the best of my ability. He told me to just walk as much as I needed to and to walk as much as it was comfortable and that's what I did."

Andrews also described himself as a "pesce-tarian" Which is a person who doesn't eat meat except for fish. He also showed up to the NovaCare complex sporting a bright red "Bro-hawk." At the very least, Andrews is always coloful.