Share All sharing options for: Kendra Wilkinson does her best Anna Benson impersonation 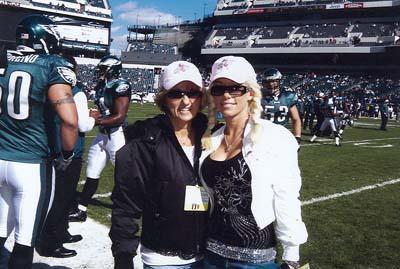 Hank Baskett's fiance and "Girl Next Door" Kendra Wilkinson was on Fox sports "Best Damn Sports Show" and had a few interesting things to say...

• Reveals that at a recent Eagles Christmas party she asked the Eagles owner, Andy Reid and Donovan McNabb to throw more passes to her fiancé, Hank Baskett and asked them to sign him for another year.
• She wonders why Kevin Curtis gets more balls thrown his way than Hank, going so far as to say that anytime Kevin touches the ball, nothing happens. But when Hank touches the ball, things happen.
• She has suggested end zone celebrations to Hank, one of which was to have Hank re-enact their engagement in the end zone by getting down on one knee and "proposing" to the ball.
• Says that Hank "blows her kisses" after every catch.

This is where my palm smacks my forehead...

Thanks to Foos5 for the heads up