Eagles win over Browns: What they're saying

Share All sharing options for: Eagles win over Browns: What they're saying 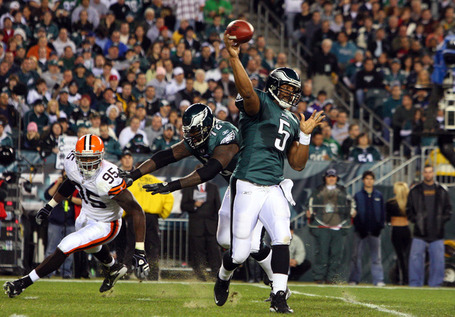 Donovan McNabb wanted everyone to know he was happy and having fun.

"I'm always happy. I'm happy to be out here just playing football, and that's the most important thing," McNabb said. "That's something that I told myself that no matter what situation I'm in, I'm going to have a ball out here, and the people around me are going to enjoy it, too."

Anyone who could his post game sitdown with the ESPN crew could tell McNabb was having fun. However, in that interview he made it very clear that he did not agree with his benching and still clearly is not "ok" with it. Steve Young asked him if maybe benching him was a way to wake up the whole team. McNabb said it could be, but asked why he had to be made the "scapegoat." Young may be onto something...

I think what happened to Donovan has something to do with the way we're playing," Avant said. "When we saw him get benched because of how we were playing as a team, we all picked up our play."

"I was kind of thinking about the celebration too much," Samuel said. "I don't even think I was paying attention, just being nonchalant, kind of let it go. Quick thinking, picked it up.

Several Eagles were asked about their playoff chances and their focus is on continuing to win.

"Worrying about it is not going to change anything," noted middle linebacker Stewart Bradley. "If we don't win out, it's all for naught. We have to focus on winning our games."

"We've got two very good teams coming up," he said. "They are teams that beat us earlier in the season. I hope we're paying attention to the scoreboard of the game we're playing. That's the only thing we can control."

Speaking of Westbrook, his fantastic effort getting back downfield after the INT on the last play of the half is the only thing that kept Browns' CB Brandon McDonald out of the end zone.

"They tried to throw the fade on me and I was able to make a play," he said. "I wish I could've gotten those extra yards for the touchdown, but I ran out of gas at the end. Brian Westbrook got a good angle on me. I'm not really a 100-yard dash kind of guy."