Eagles stroll to 30-10 win over Browns

Share All sharing options for: Eagles stroll to 30-10 win over Browns 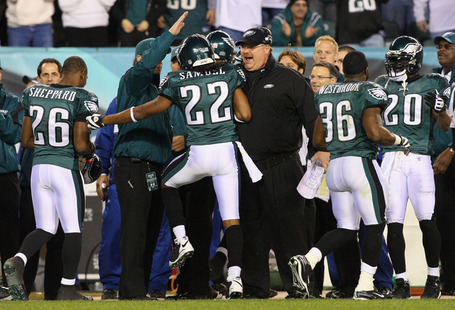 There were some frustrating moments in this game. The call for Desean Jackson to throw a pass in the red zone, the potentially disastrous McNabb INT on the final play of the first half, McNabb missing a wide open LJ Smith in the end zone... but the fact is that the game was never in doubt. They scored on the opening possession and the lead more or less just grew from there on out. The Browns didn't score until a Kevin Kolb pass was tipped and returned for 6 in garbage time. The Eagles offense moved the ball with ease all night, although it sputtered in the red zone a few times... and the defense was absolutely dominant

The Eagles did not punt until there were 7 minutes remaining in the game.

Pretty bizarre to see a game with 3 INTs all thrown by different guys. I can't imagine that's happened too many times in NFL history.

The story of the night was Donovan McNabb just being on his game. He simply looked effortless tonight. I don't know if the Eagles planned to go pass heavy tonight or just decided to keep in in McNabb's hands because he was throwing so well. Tonight McNabb was 26 of 35 for 290 yards and 2 TDs. HIs QB rating finished up at 105.7

Defense with another great effort

Another week, another big effort from the Eagles' D. The defense held the Browns' offense to just three points on the opening drive of the game. In fact, the Browns never even got inside the red zone after that first drive of the game and only crossed the 50 yard line once after that. The only other Browns points came on a defensive TD late in the game. The Eagles came up with a defensive TD of their own in the form of an Asante Samuel pick 6 in the second quarter. Stewart Bradley added a pick later on as well. The Browns managed just 196 yards of total offense and Ken Dorsey was sacked twice.

Trent Cole had one sack and generally abused pro bowler Joe Thomas all night. Chris Clemons got the pressure that led to the Samuel pick 6, and Quintin Demps got his first NFL sack.

Here's a stat that sums up how well the special teams played tonight. The Browns did not start one drive inside Eagles territory. In fact, their best starting position was their own 35 yard line... The Browns great return man Josh Cribbs was completely nuetralized, both by great coverage and several huge kickoffs from David Akers.

On the other side, Quintin Demps made the most of his 3 returns averaging nearly 30 yards a pop.

David Akers continued his solid form with 3 FGs on the night.

Time to look ahead

Tonight was a comfortable, workman like win from the Eagles... but now it's time to move on. The Eagles have a short week with the free falling Redskins up next. The mission is the same today as it was yesterday. Just keep winning.