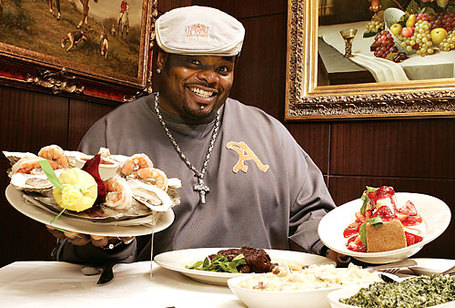 You may have heard a story this week about an incident where Vikings' TE Visanthe Shiancoe was accidently shown naked in the lockerroom by Fox cameras. You may also remember when something just like this happened with Joselio Hanson a few years ago.

On the WIP morning show Hugh Douglas mentioned that he thought maybe Shiancoe did it on purpose and that NFL players get a kick out of exposing themselves to reporters.

Deadspin decided to get ahold of Hugh to confirm this revelation, which he did. He also gave a few examples. It seems like the Eagles lockerrom circa 2005 was a regular male strip club...

Hollis [Thomas, former Eagle, current Saint] would do it all the time. Anytime there would be a female reporter in the locker room he'd just let it all hang out. Hollis was funny like that. He'd always try to get people to look at him."

Oh, [Al] Harris. Al would find out there would be media around and he'd drop his towel and walk slowly across the locker room. Then he'd be all bending over and shit. He was into it too."

Hugh also said "If they think they got it, they're gonna show their stuff."

I'd like to know why Hollis Thomas thinks he's "got it."