Where have you gone Reggie Brown?

Share All sharing options for: Where have you gone Reggie Brown?

Chris Collinsworth made a point of mentioning several times Thanksgiving night that the Eagles told him they would be rotating WRs less that night than in other games. They felt that the rotating of WRs was making it hard to get a rythm on offense. 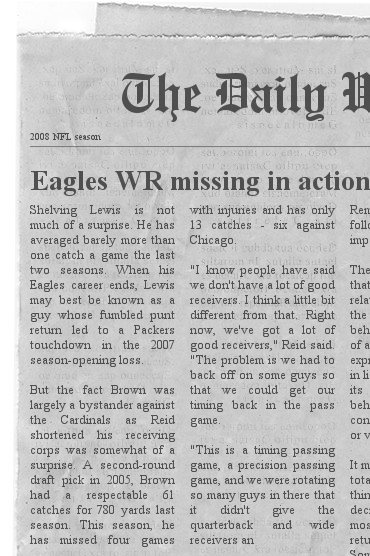 Collinsworth said the Eagles would stick primarily with Desean Jackson and Kevin Curtis on the field all game with other guys rotating in at 3 and 4. However, there was as little rotating at the 3 and 4 spots as there was at 1 and 2. Quite clearly, Jason Avant and Hank Baskett were the 3 and 4 WRs.

Reggie Brown was no where to be seen. Neither was Greg Lewis... but who cares?

The fact that Brown was relegated to the bench is interesting. It's not surprising that he isn't starting over Curtis or Jackson, I think we al can see that those guys are better players than Brown. However, to see him fall down the depth chart below guys who used to be his backups is a surprise. There's no doubt that based simply on how the WRs have performed this year, Baskett and Avant deserve to be ahead of Brown.

It's hard to figure where Brown's place on the team is right now. Curtis and Jackson are the starters and that shouldn't be changing for quite a while. At least in the case of Jackson, he should be the starter here for many years. The other WRs have clear roles and attributes they can hang their hat on.

Hank Baskett is the biggest WR on the team. We've seen him work in the end zone and get on the end of the fade pass a few times and we've seen him make several tough catches this year.

Jason Avant probably has the best hands on the team. He's not our fastest WR, in fact he's probably the slowest, but he goes over the middle and catches anything thrown his way. Every team needs that kind of tough, move the chains type of WR. He'll never be a star or gamebreaker but a guy that find a hole in coverage and make a tough first down catch over the middle will always be an important role player here.

So what can Reggie hang his hat on? He's not a big WR, but he's not small either. He's not an incredibly speedy WR, but he isn't slow. He has had suspect hands at times and has been drop prone. Andy Reid said Reggie's absence against Arizona was simply a case of things being "too diluted"

"This is a timing passing game, a precision passing game, and we were rotating so many guys in there that it didn't give the quarterback and wide receivers an opportunity to get on the same page and get enough reps in practice. So as good a player as Reggie is, we cut back his reps a little bit. That doesn't mean Reggie can't play or won't be a factor in these games. But it was just so we could tighten things up a little bit in the passing game. Things were getting too diluted there."

So does Andy think the pass game will get rolling again and he go back to playing whatever WRs he wants at any time? Or will he get wise to the fact that letting guys flourish in a certain role isn't a bad idea?

What is Reggie Brown's future with this team? Will the former second round pick simply be a Greg Lewis type spare part for years, will he be the player that caught 8 TDs in 2006 again, or will he be somewhere else?