Darren Howard succeeding on the inside

Share All sharing options for: Darren Howard succeeding on the inside 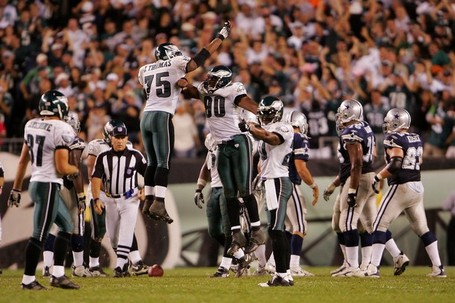 Yesterday we held a poll of our own about the most suprising Eagle of the first half. It looks like Desean Jackson has the edge. but Darren Howard is running a close second.

As Reuben Frank pointed out today, Darren Howard was brought here as a high priced defensive end... but last year was relegated to a backup defensive tackle. It looked like his time in Philly was drawing to an end.

"My first two years here, I really thought I'd be getting more reps at defensive end, and it was difficult to deal with when I didn't play that much," Howard said.

"Then, when they moved me — when you talk about pass rushing in the NFL, you're usually talking about linebackers and defensive ends. There's not a lot of guys coming off the bench as situation defensive tackles getting a ton of sacks."

"I really didn't think it would work out like this," Howard said yesterday, a day after the Eagles improved to 5-3 with a 26-7 win over the Seahawks. "I thought I'd get some pressure, maybe get a sack here and there. But it's worked out better than I ever thought it would."

Howard leads the team in sacks with 6.5. His ability to bring pressure from the inside on passing downs looks like it hasn't just been a surprise to fans, it's a surprise to him.

He credits a lof of his success to health. He's been plauged with injuries since he got here, but it seems like his new limited role has given him the chance to stay fresh and healthy.

"It's working out well because I'm healthy, I'm not playing as much, and on Monday, I still feel pretty good. So when I do get out there, I can go 100 percent."