Shawn Andrews is back in town

Share All sharing options for: Shawn Andrews is back in town 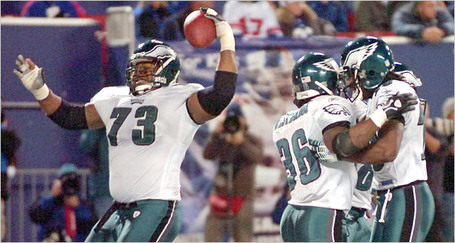 Shawn Andrews has spent the last several weeks in California on the advice of his doctors after having back surgery out there. He'd been waiting to get the green light from the specialist out there who did the surgery to make the cross country flight back to Philadelphia. He got that green light and his back in town.

"(Trainer) Rick Burkholder and I will meet with him today and see exactly where he is at," Reid said Monday. "I know that the flight was a bit painful for him coming back. That's a long flight from (California) and he did feel a little bit of that. I'm not sure exactly how far or how close he is to being in football shape so we'll talk to him, communicate with him, and just see how he's doing and then continue to rehab him there."

It's interesting that the Eagles have still not put Andrews on IR, meaning that he an come back at any time. Clearly Reid is hoping that in a few weeks Andrews will be able to return to the lineup in place of the "backup backup" Nick Cole.

Reid also talked about the progress of rookie OL Mike McGlynn, who will now become the primary backup for all inside OL positions.

"McGlynn has been consistently improving," Reid said. "The thing that he does is he gives you a guy who can play all three positions. We feel very comfortable with him at any of those spots. He will work in and he'll get an opportunity to be active."