Share All sharing options for: McNabb leads Eagles to Thanksgiving blowout of Cards 48-20 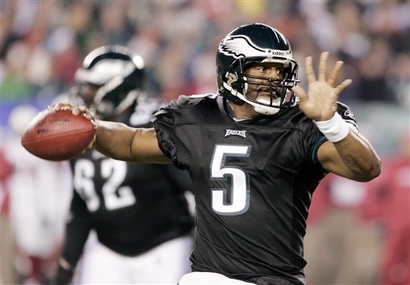 This is why we watch these games every week.... because eventually we see a show like we saw tonight. Domination, redemption, elation....

For the second week in a row Kevin Kolb entered the game in relief of Donovan McNabb, but this time the circumstances couldn't have been more different. Donovan was sat after leading the Eagles to a spectacular Thanksgiving night blow out in what was his finest performance on the year. McNabb's final stats speak for themselves.

What a story of redemption for McNabb tonight. Only 4 days after being benched for the first time at any level of his career and coming off easily the worst 2 game stretch of his career McNabb puts on a virtuoso performance on a national stage against the playoff bound Arizona Cardinals.

There's really not much to say. I'm in awe of the guy. The guts and fortitude it must take to get over the couple of weeks he had and play like he did tonight are immeasurable. Tonight, I give thanks for you #5.

Who called the plays tonight?

The Eagles team we saw tonight was very much reminiscent of the hat ran the table in 2006 and made the playoffs after Marty Mornhinwheg was handed the playcalling duties. Several times the NFL network cameras showed Mornhinwheg on the sidelines studying the play chart and calling plays, not Reid. When Marty has had the chance to call this offense, it's clear that he has always put more emphasis on running the ball. Whether it be here in late 2006 or when he was OC in San Fran and they led the NFL rushing. Tonight was not simply a case of the team executing better. They certainly did that... but there was a new attitude and philosophy with the playcalling tonight. WE RAN THE BALL!

Ladies and gentleman, YOUR Philadelphia Eagles racked up 185 yards rushing tonight. When was the last time that happened? 39 passes, 37 runs(if you take out Kolb's kneeldowns). That is what a balanced offense gets you in the NFL.

It's all about commitment

How many times have I said this over the past couple weeks? When everyone said this offensive line couldn't open holes, that Westbrook was too hurt and that was the problem... All those things were factors, but I consistently said that no team that doesn't commit to running the ball will ever be successful doing so. Tonight was proof of that. The Eagles committed to running the ball from the first time they touched it and it paid dividends throughout the game. It's not that telling when Brian Westbrook has a great game like he did tonight. 22 carries, 110 yards, 4 TDs... We know he can be that good... but when guys like Kyle Eckel and Lorenzo Booker are getting 5 and 6 yards a carry every time they touch the ball that's telling. By the 3rd quarter of this game the Eagles O-line had imposed their will on Arizona and it didn't matter who was running through the holes.

Speaking of Kyle Eckel... The biggest cheer of the night came when Eckel converted the Eagles first 3rd and 1. We all know 3rd and 1 has been an achilles heel for us this year and when the crowd saw the Eagles bring in a big back to run for a first down on 3rd and 1 the place erupted. Were you listening Andy?

Great job by Westbrook tonight and good jobs by Eckel and Booker who made the most out of every touch they got.

This Eagles defense came to hit people tonight. Especially that secondary. Faced with arguably the best and most physically imposing WR tandem in football, Jim Johnson had his boys jamming them at the line and punishing them whenever they did catch the ball. Sheldon Brown, Brian Dawkins, Quintin Mikell, and Joselio Hanson all delivered several big shots to Cardinal WRs after the catch. You certainly have to wonder whether the physical play of this secondary tonight had more than a little something to do with the Cards catching a case of the drops.

Despite getting pressure on Warner all night, the Eagles defense did not record a sack. However, they did it's job. The Eagles were able to generate pressure with their front four, namely from Cole and Clemons, which allowed them to sit more back in coverage and force Warner to quick throws rather than the down field stuff that has worked so well for Arizona this year.

Get this... Arizona only rushed for 25 yards tonight.

The Eagles defense forced 4 turnovers, including 3 picks off MVP candidate Kurt Warner and a recovery on one of 3 Arizona fumbles tonight. Brian Dawkins forced a fumble with a big hit on Anquan Boldin and tied the Eagles all time interception record with a late pick.

Was anyone else surprised... or even shocked to see Joselio Hanson and not Lito Sheppard announced as the starter in place of the injured Asante Samuel?

If you were, you certainly understood why after watching the game. I thought Lito had one of the poorest games I've ever seen a corner on this team have tonight. All three Arizona TDs were thrown at him and he gave up a big gain to Larry Fitzgerald. I really don't know what has happened to Lito this year. Maybe being unseated as the starter has totally messed up his head or something... but right now I honestly don't think he should even be on the field. Look at his last few weeks. He had a shocking game tonight, gave up a 90 yard pass against the Seahawks and a big TD that arguably decided the Ravens game.

I remember before the year we all debated on whether it was Lito or Sheldon who should be unseated to make room for Samuel and which guy was the better corner... Certainly there can be no more argument any more. At this point is Lito better than Joselio Hanson? Not from what I saw tonight. Hanson was solid. So was Quintin Demps who was primarily a safety in college but saw a ton of time tonight playing as the 4th corner.

Give thanks to the Birds

It's not been a great season so far... but I wanna thank the Eagles for at least giving us a great end to our Thanksgiving holiday and for maybe giving us just that little sliver of hope that change could be on the way for this team.