Will the Eagles Thanksgiving night game be shown locally?

Share All sharing options for: Will the Eagles Thanksgiving night game be shown locally?

I first noticed this story brought up over on the 700 Level who found a story saying that a deal had been struck that would allow the Eagles Thanksgiving game to be shown locally on 6ABC.

Nationally, the game will be broadcast exclusively on NFL Network. But then they found another report which contradicted the early one.

Contrary to news reported by The Associated Press in Monday's edition of The Evening Sun, the Thanksgiving Day NFL game between the Philadelphia Eagles and Arizona Cardinals will be not shown locally.

Comcast spokesman Fred DeAndrea said Monday that the NFL Network and WPVI-TV, Philadelphia, which will televise the game, and Comcast could not work out an agreement by which the game would be shown on any station other than the NFL Network.

According to that report you will have to NFL Network to see the game on TV.

However, as of 6pm on Wednesday the Eagles own website says the game will be on both 6ABC and NFL network. Note where it says "TV" 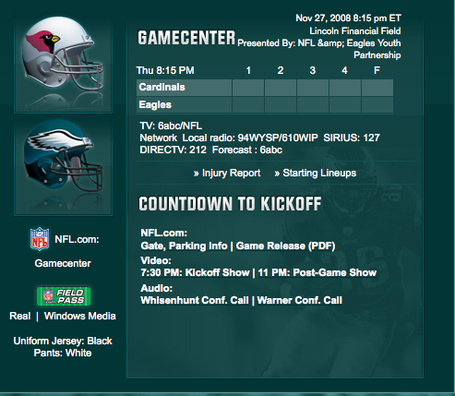 What is the truth? I suppose we'll find out Thursday when the game is either on or it's not.

If all else fails the game will be shown for free live on NFL.com