Share All sharing options for: Booker learning to block

One of Lorenzo Booker's biggest struggles when he joined the Eagles was learning how to block and pick up the blitz. So every day after practice, Booker would spend a half hour or so trying to block 246 pound LB Joe Mays. 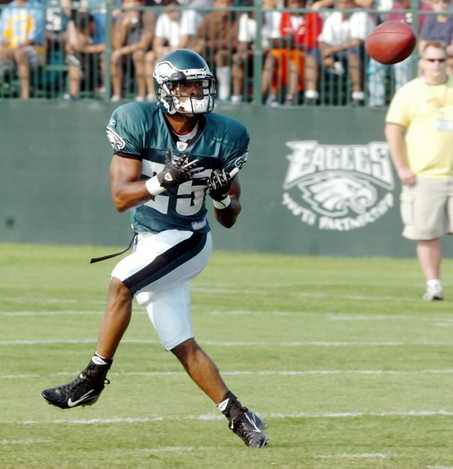 "He thought me, being a bigger guy, I was just going to bull-rush him the whole time," Mays said. "When we first started, it seemed like he was anticipating it too much, and sometimes he’d react without knowing what I was going to do, and I was able to get past him a couple of times. But as we continued to work, he got patient. He sat back there, waited, I gave him a couple of moves, but he still waited. He waited till I did my final move, and he capitalized on that."

"He got better as time progressed. I think he’s going to do well in pass protection," Mays said. "You shouldn’t have to worry about that."

Fact is that film study and practice reps can only teach you so much. For better or worse Booker has only touched the ball 21 times this year. He certainly hasn't shown us much in those 21 touches, but if he doesn't play he's not going to get any better. For the first time this season, Booker is heading into a week knowing that he's likely to see significant playing time.

"This is the first game for me since I’ve been here where I’m coming into a game knowing that I’ll get a significant amount of playing time. I’m excited to be able to go out there and feel like I’m helping the team get back on track."

"Of course, I'm excited to be able to just go out there and feel like I'm helping the team get back on track."

With Brian Westbrook missing practice this week(and every other week) and Correll Buckhalter out... Booker is our freshest and most healthy back right now.