Share All sharing options for: Buckhalter to miss Thanksgiving game 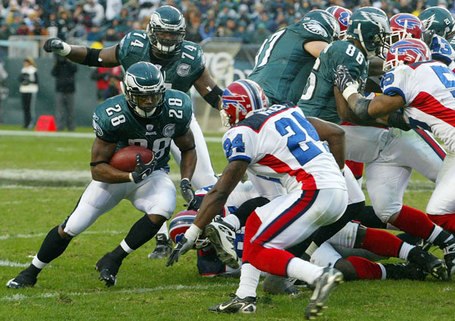 It looks like we've got a lack of running backs

The only Eagles running backs practicing yesterday were Lorenzo Booker and Kyle Eckel. Booker has been inactive the last three games, Eckel all five games since the Eagles signed him.

Reid said last night that Buckhalter is out for the Eagles' game against the Cards Thursday night at the Linc with a knee sprain. Westbrook is expected to play, but has been a shadow of his former self, thanks to injuries to his ankle and knee.

"It's a sprain, it's not too bad, I should be back for the Giants game (Dec. 7)," said Buckhalter, who missed three full seasons early in his career with severe knee injuries. "Nothing like that (previous knee injuries). I just have to rehab for a couple weeks, and I'll be OK."

The Eagles dressed only two running backs against the Ravens and when Buckhalter went down they were left with just Brian Westbrook who doesn't look to be more than 60% healthy right now.

So with a short week ahead and only one team practice before Thursday it looks like Lorenzo Booker will get nearly all of the first team snaps.Even in the 8 games Booker has been activated this year, he's only carried the ball 16 times.

He'll obviously be active for Thursday, but whether FB Kyle Eckel will also be activated remains to be seen. Dan Klecko missed several blocks on Sunday and I can't see how Eckel could be any worse.